Danny Griffiths explained to FOX Television Stations how he was reunited with his beloved surfboard after losing it four years ago.

TASMANIA, Australia - In April 2017, surfer Danny Griffiths lost his beloved surfboard in a wipeout off the coast of Tasmania, Australia.

He thought it was lost at sea until he was reunited with it four years later, thanks to two brothers who found the board two years after the separation.

Then over the next two years, word of mouth and a picture eventually spread to Griffiths that his surfboard was safe and sound and the brothers were willing to return it.

"This board meant so much to me as it was made for these biggest swells that I put my life on the line to break my own records and surfing records if possible," Griffiths told FOX Television Stations. "So it had so much time and design put into it to suit my style and approach to big wave surfing."

"I’ve never had one the same since that was as good or as comfortable as this one was," he continued.

Griffiths said he had last used his surfboard while filming a documentary. He had encountered a big surf wave at Pedra Branca, a place off the coast of Tasmania known for its intense waves.

He said when he got caught up in the wave, he lost his surfboard and spent hours in the dark looking for it.

"We gave up and cut our losses," he said.

According to Griffiths, two brothers found the surfboard two years later in North Queensland, about 1,700 miles away from where Griffiths last had contact with it. The brothers cleaned it up and put it on display in their house.

The brothers’ discovery slowly circulated among locals and eventually reached Tasmania after their parents took a trip there and spread the word.

Pictures of the surfboard recently started to surface among the surfing community, eventually reaching Griffiths.

"When I seen (sic) the photo I knew straight away it was mine and was shocked, like it was a joke or a dream," he said. 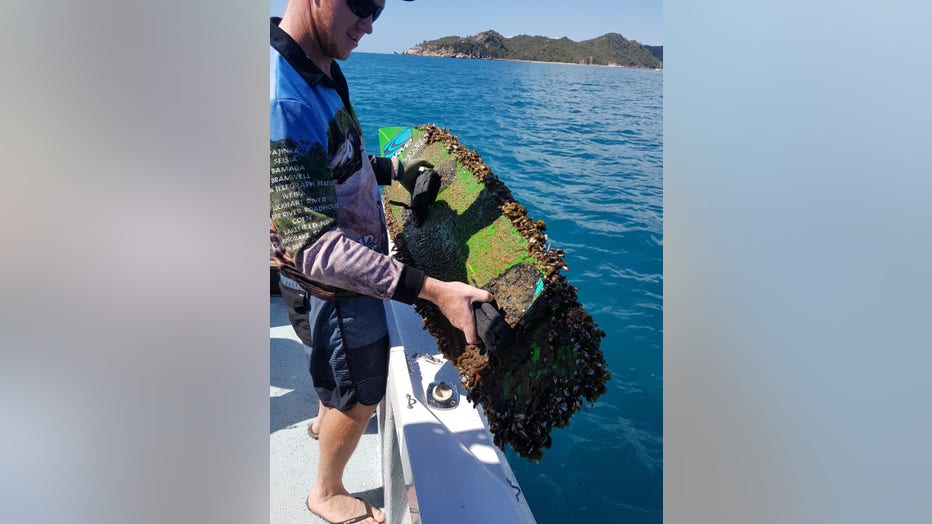 How Griffiths' surfboard appears when pulled out of the water by two brothers. (Credit: Danny Griffiths)

He said underneath the barnacles, he noticed the surfboard had the same color and logos as his lost surfboard. So he got in touch with the brothers, who were willing to return it.

A scientist told Griffiths that oceanic currents must’ve drifted the board up to New Zealand then over to Queensland, estimating the journey took about 16 months.

The surfer said he plans to get his board inspected, and possibly add a GPS tracker, before using it again.