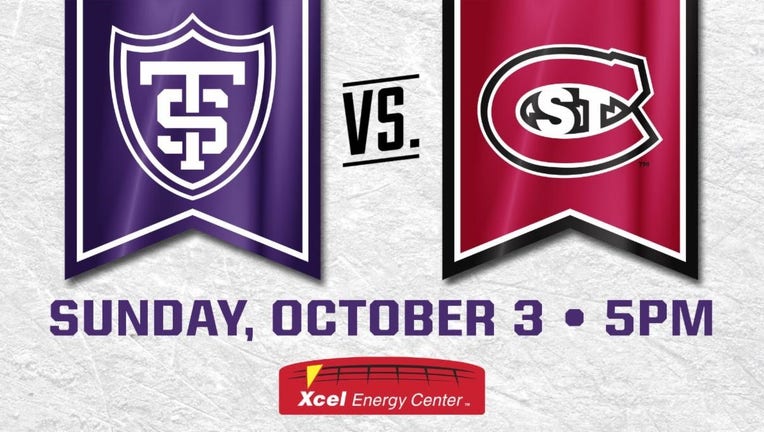 The University of St. Thomas men's hockey team will open its 2021 home schedule as a Division I program on Oct. 3 against St. Cloud State at Xcel Energy Center. ((credit: St. Thomas Athletics))

MINNEAPOLIS - The University of St. Thomas men’s hockey team announced Tuesday it will make its home debut as a Division I program at Xcel Energy Center.

The Tommies will host St. Cloud State at 5 p.m. on Sunday, Oct. 3, at the home of the Minnesota Wild. St. Thomas will make its Division I debut the night before against the Huskies at the Herb Brooks National Hockey Center in St. Cloud.

Tickets for the game at Xcel Energy Center will go on sale at 10 a.m. Friday, Sept. 10, via Ticketmaster. It’s a huge challenge for the Tommies to start their first season in Division I. The Huskies were the NCAA runner-up last season, winning six of their last eight games to finish the season 20-11.

Back in April, St. Thomas hired Rico Blasi to take over the program as it starts Division I play. Blasi has 398 career coaching wins, including two Frozen Four appearances and one runner-up finish.

St. Thomas will have 16 newcomers and 11 returners from last season. The Tommies finished 6-1-2 last year in a season shortened due to the COVID-19 pandemic.

The Tommies will compete in the CCHA in the 2021-22 season, starting Oct. 8-9 with a series at Northern Michigan. St. Thomas will open home league play against Ferris State Oct. 23-24 at St. Thomas Ice Arena, and they’ll host Penn State in a non-conference series Nov. 23-24.