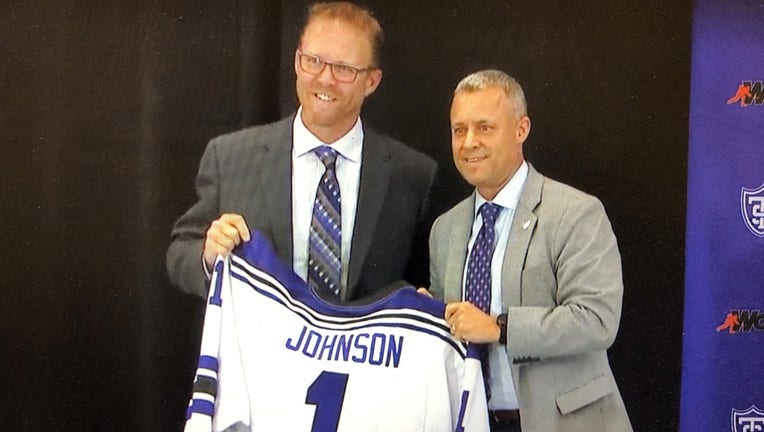 The University of St. Thomas on Thursday introduced Joel Johnson as the next women's hockey head coach as the Tommies head to Division I next season.

MINNEAPOLIS - The University of St. Thomas will enter Division I athletics next fall, and on Thursday the school introduced Joel Johnson as its next women’s hockey head coach.

Johnson will take over the program after Tom Palkowski helped lead the Tommies to 202 wins over 12 seasons, including two Final Four teams between 2014-19. St. Thomas had won nine MIAC regular season or playoff titles in the last six seasons, and has had top-three finishes in the MIAC in each of the last 19 years.

Marty Sertich was the interim coach this past season, as the Tommies went 6-2 and had 11 games postponed or canceled due to the COVID-19 pandemic.

Johnson is the new face for St. Thomas, which will start Division I play in the WCHA next year.

"As we think about the future of Tommie women's hockey, there is no one better positioned to lead our team into Division I and into the WCHA," St. Thomas Athletic Director Phil Esten said Thursday at an introductory news conference for Johnson. "Through our national search that spanned an impressive pool of candidates, it became clear that Joel is the right individual to lead our women's hockey program, now and into the future.  He epitomizes what it means to be a Tommie as a relationship-focused servant leader that develops his student-athletes both on and off the ice."

He's had other coaching opportunities, but said Thursday he's found the right fit.

Johnson has more than 20 years of coaching experience, both in college and with USA Women’s Hockey. He’s already spent 16 years in the women’s WCHA. He had been the associated head coach for Brad Frost at the University of Minnesota the last 11 seasons, helping lead the Gophers to six national titles and 11 appearances in the Frozen Four.

Johnson is also the interim coach for the USA Women’s Hockey Team. He was an assistant for the national team from 2018 to 2020. He was also an assistant coach for Bethel from 2004-10.

He’s the third head coach in the history of the St. Thomas program.

"I think St. Thomas is in a unique spot to have great success. Our approach is going to be a win-win philosophy, my entire coaching career has always been about a dualistic thinking. We want to win, but we have to define success properly. Success for me is the fulfillment and embodiment of our values. As a hockey program, we’re going to be measured by our success on the ice. But we will not define ourselves based on our success," Johnson said. "We will define ourselves based on our commitment and fulfillment to the culture and the values that our women’s hockey program agree early on here’s who we’re going to be about, here’s what we’re going to be about. We’re going to compete for championships as time goes, but we’re never going to waver from the commitment."