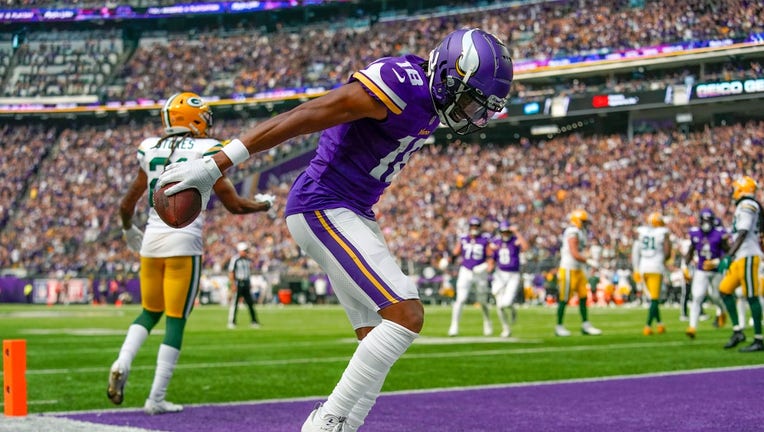 MINNEAPOLIS - The National Football League announced its weekly offensive and defensive awards for the NFC and AFC Wednesday morning, and a certain Minnesota Vikings wide receiver was nowhere to be found.

The NFC Offensive Player of the Week award went to Saquon Barkley of the New York Giants. Barkley had 164 yards and a touchdown on 18 carries, with his longest run going for 68 yards. He also ran in for a two-point conversion.

Saquon Barkley won the NFC Offensive Player of the Week award despite a career day from Justin Jefferson in a win over the Packers on Sunday.

Plain and simple, Justin Jefferson got snubbed. Jefferson had nine catches for 184 yards, a career-high, and two touchdowns in the first half as the Vikings beat the Packers 23-7 to open the Kevin O’Connell era at U.S. Bank Stadium. Jefferson wants to be the best receiver in the NFL, and he’s leading the league in receiving yards after Week 1. He averaged 20.4 yards per catch, and made a pretty good Packers’ secondary look silly most of the day.

His 158 yards on six first half coaches set a Vikings’ franchise record. He set an NFL record with 3,016 receiving yards combined in his first two seasons. Had it not been for Mike Zimmer, Jefferson likely breaks Randy Moss’s single-season receiving record with the Vikings last year.

Jefferson probably doesn’t care much about the individual honors. He cares about getting the win, beating a division rival and starting the season 1-0. It’s absurd that he didn’t get the award. Jefferson and the Vikings take the national stage in Week 2, traveling to Philadelphia for Monday Night Football.

Not that he needs the motivation, but maybe getting snubbed will give him an extra chip on his shoulder against the Eagles.