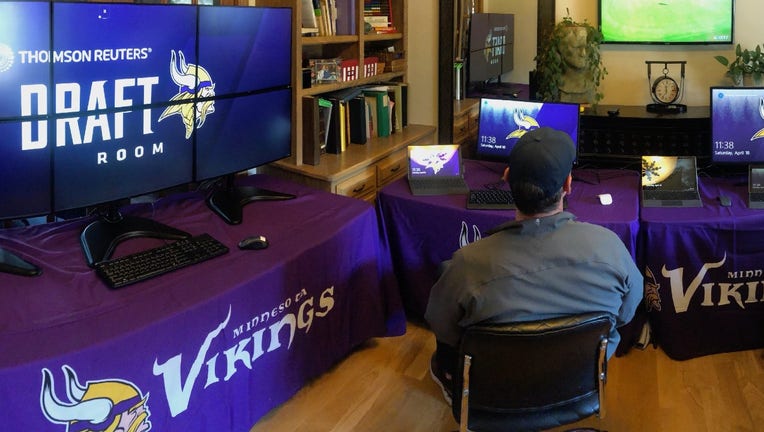 MINNEAPOLIS - In what’s widely been considered the most important offseason for Rick Spielman with the Minnesota Vikings, most experts across football agree he had one of the best weekends in the NFL Draft.

Spielman and the Vikings entered the draft with 12 picks. He traded the team’s final pick of the third round, after taking calls from five teams, to the Saints for four draft choices on the final day. The Vikings ended up with 17 total picks, drafted 15 players and traded the other two for 2021 draft picks.

The Vikings addressed their most glaring needs in the early portions of the NFL Draft. They brought in a wide receiver to potentially replace the production of Stefon Diggs. They moved down in the first round and got a physical defensive back in Jeff Gladney. They got a future starter on the offensive line in Ezra Cleveland, another possible secondary starter in Cameron Dantzler and might have added the next dominant force on the defensive line in D.J. Wooton.

Spielman, in what’s become a tradition with Twin Cities media in recent years, showed film of Minnesota’s top nine draft choices and went into detail about what he liked about each of them. The Vikings got 15 players out of the draft, and roughly half of them could be tasked with being on the field Week 1. At the end of the day, it’s all a calculated risk and we won’t know the results for a few years down the road.

“It’s always going to come down to what you see on tape, but what you try to do is you try to minimize the risk. It’s never 100 percent, it’s all subjective,” Spielman said. “But you’re trying to take as many of the objective things as you can, and then minimize the risk on the prediction of what these players are going to be when they come out.”

Spielman wouldn’t say if LSU’s Justin Jefferson was the top receiver on his draft board, but he ended up with the Vikings at No. 22, the pick Minnesota got from the Buffalo Bills in the Diggs’ trade. Jefferson tied for the FBS lead with 111 catches this past season, and added 18 touchdowns.

He also won a national championship.

“I can just tell you we felt very strongly about him and we were very happy that he fell to us at 22,” Spielman said.

It’s a detailed and complicated process that Spielman and Vikings’ staffers go through before even getting to draft night. They watch hours of film, put prospects through physical and mental testing and at the end of the day, they get physical, intellectual and psychological numbers they draw from in hopes of adding talent and the right fit to the football roster.

Spielman joked Tuesday he’s had to learn new technology in a hurry, with the NFL Draft and the off-season programs for all teams going fully-virtual. He put tasks in the hands of the IT team, and the results have him wanting to enter the IT world as an essential employee during the Coronavirus pandemic.

Technology will continue to become more pivotal as team facilities continue to be closed. There’s a real chance players and teams won’t come together again until training camps start.

“It’s like the long-snapper, as long as everything is running smoothly, you don’t hear about them. Until something flubs up, then everyone wants to jump on them,” Spielman said. “Our IT people, you don’t hear anything about them because of how capable they are their jobs. It really brought to light how important these people are in our organization.”

Spielman was asked about D.J. Wonnum, a defensive end out of South Carolina the Vikings chose with the No. 117 overall pick. He had 9.5 tackles for a loss last season, 4.5 sacks and is already drawing comparisons to current Vikings’ star Danielle Hunter.

The testing and his traits show the potential is there.

“I’m sure in the heck going to make sure I do everything I can because we already know how he’s wired, to try to reach that very high goal,” Spielman said.

Spielman was also asked about prospects who fought through injury and wound up with the Vikings. Gladney played through most of his final season at TCU with a knee injury and finished with 31 tackles. He led the Big 12 with 14 pass break-ups.

On a torn meniscus at the NFL Combine, Gladney ran a 4.48 40-yard dash. He had surgery after the Combine and will be ready for the season.

Cleveland, on Boise State’s offensive line, played through turf toe most of last season and wore a boot when he wasn’t playing. Spielman went back to 2018 film on him to get a full evaluation. His size and athleticism should be the right fit to play tackle in the Vikings’ zone run scheme. Both Gladney’s and Cleveland’s willingness to play through pain impressed Spielman.

Spielman and this draft class will ultimately be judged on how many players can contribute, how quickly they get there and how much they contribute to wins. They face that challenge head-on, not knowing when they’ll see a field for a live practice.

“It’ll just be how quickly we can get them developed and get them ready to go out and play,” Spielman said.