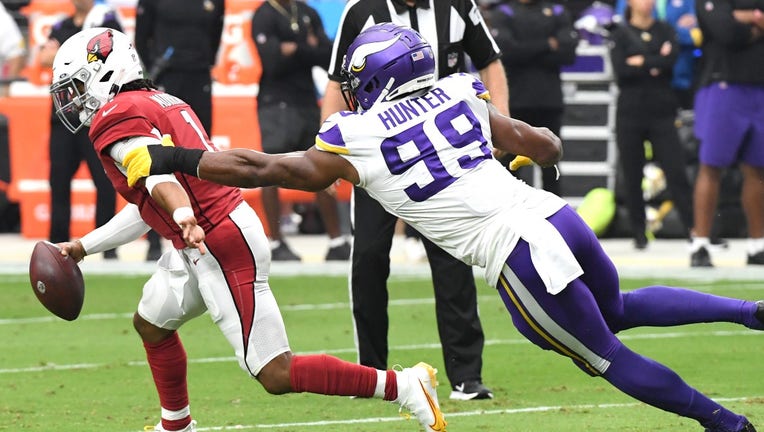 Quarterback Kyler Murray #1 of the Arizona Cardinals turns away from Danielle Hunter #99 of the Minnesota Vikings in the half of the game at State Farm Stadium on September 19, 2021 in Glendale, Arizona.  ((Photo by Norm Hall/Getty Images))

MINNEAPOLIS - The Minnesota Vikings suffered an inexplicable 20-16 loss to the Dallas Cowboys and back-up quarterback Cooper Rush on Sunday night, and now they're without their top pass rusher for the rest of the season.

Vikings coach Mike Zimmer confirmed on Monday that defensive end Danielle Hunter suffered a torn pectoral muscle in Sunday's loss. He'll miss the remainder of the season. Hunter was injured during the first half of the Vikings’ loss to the Cowboys, and did not return to the game.

Zimmer said after the loss Hunter was getting an MRI on Monday. Zimmer confirmed Hunter is out for the season, a crushing blow to both Hunter and the Vikings’ defense, already without Michael Pierce and Patrick Peterson.

"Losing Danielle, possibly, is very hard. He’s a big-time player for us, that situation is hard," defensive end Everson Griffen said Monday. "In this game, that’s why you’ve got a football team and you gotta go out there and we gotta get the young guys going and get them ready to play. But losing Danielle is a big blow. It's devastating for our football team to lose one of our star players. It hurts."

"That’s my brother, man. I hate to see him go down like that. Get well soon, D. We love you. That’s tough for us. Losing a big piece like that is tough," running back Dalvin Cook said.

Hunter missed the entire 2020 season after having to have surgery on a herniated disc in his neck. The pec is the same injury Anthony Barr suffered during Week 2 last season, which ended his season and sent the Vikings to a 7-9 tailspin.

In six games before Hunter got hurt Sunday night, he looked like his old self with 38 tackles, six sacks and 10 tackles for a loss.

Hunter took a chance on himself with his contract last offseason, agreeing to a re-worked deal that paid him $5.6 million. It left him the option to get up to $20 million on the fifth day of the 2022 league year, get released, try to work out an extension or test free agency.

Now, Hunter's season is over after seven games.

"I don’t think you replace him, he’s one of a kind. It’s unfortunate that we’re going to miss the next half of the season with him and all of last year. He’s a great kid, he’ll do a great job in his rehab and he’ll be ready to go," Zimmer said.

Zimmer explained Monday what happened at the end of the first half Sunday night, with the Vikings gaining 18 yards on four plays in the final 37 seconds and taking a knee, as opposed to trying for more points. Kirk Cousins scrambled for 13 yards with 32 seconds left, and the Vikings could either use their last timeout or spike the ball to stop the clock.

They tried to get another play in, couldn’t get lined up right and Cousins ended up throwing an incomplete pass to Adam Thielen. The team went into the half with the fans booing, something that’s happened multiple times this season.

Cousins was screaming at the sideline to call a timeout, and said after the loss he leaves the usage of timeouts to coaches on the sideline.

Zimmer deemed it a miscommunication.