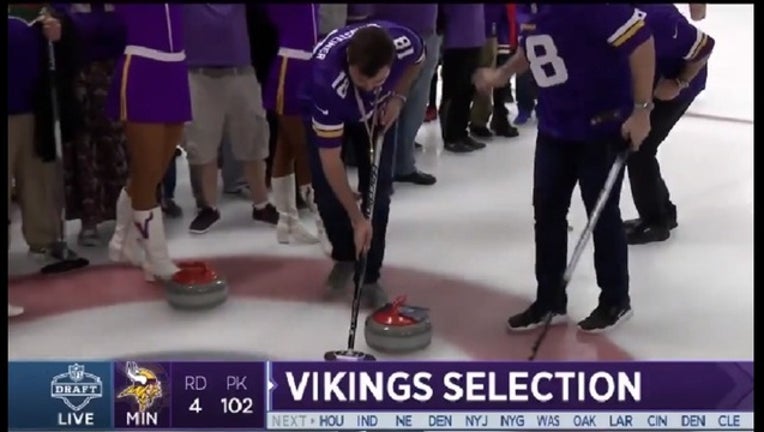 ST. PAUL, Minn. (KMSP) - The Minnesota Vikings started Day 3 of the NFL Draft with a little help from the U.S. Olympic Curling Team, who announced the selection of Ohio State defensive end Jayln Holmes from the St. Paul Curling Club.

Holmes was an Honorable Mention All-Big Ten selection in his senior season. The 6-foot-5 defensive end totaled 51 games during his Buckeyes career.

ANALYSIS: "Holmes doesn't rush well enough to be a 4-3 end and needs more strength to fit into 3-4 fronts. However, if he improves his hand usage and adds lower body strength, he has the potential to become an effective 3-4 end with the ability to push the pocket as an interior rusher in sub packages. Holmes lacks the explosiveness to be a starter who will fill up the stat sheet, but he has intriguing size/strength potential that could make him a better pro than college player."

Long-limbed with frame to pack on more functional muscle

Looks awkward in movements, but is sneaky strong

Can shudder a blocker's pads with strong pop from his hands

Long levers suit him as an interior pass rusher

Has a spin move that could become a weapon

Doesn't play with much suddenness or quick-twitch

Lack of speed and quickness limit range as a tackler

Long strider with limited upfield burst to challenge the edge

Takes too long to loop and attack the pocket on twists