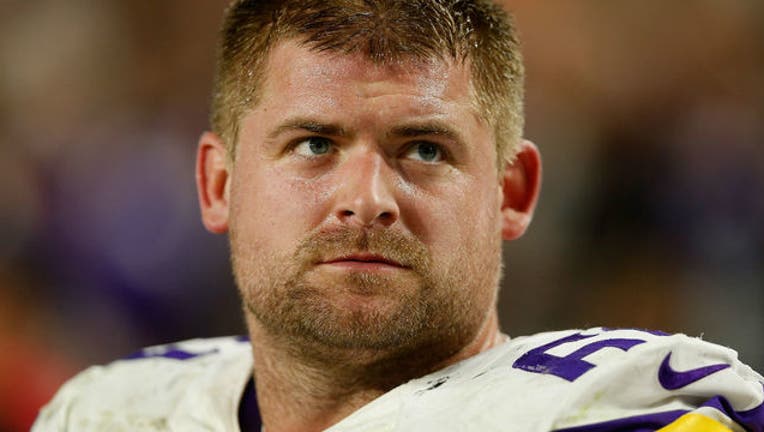 Center Joe Berger #61 of the Minnesota Vikings on the sidelines during the NFL game against the Arizona Cardinals on December 10, 2015. The Cardinals defeated the Vikings 23-20. (Photo by Christian Petersen/Getty Images)

Berger, 35, was a free agent and entertained a few offers, but in the end decided it was time to hang it up. He announced his retirement on Friday.

Berger started every game for the Vikings last year. The Michigan Tech grad played 13 seasons in the NFL, but says his time with the Vikings felt most like home.

During his time here in Minnesota, Berger was moved around the offensive line, playing both guard positions and center—a versatile guy that really helped power the Vikings up front.

Berger played 145 games during his career that included stops in Miami and Dallas before coming to Minnesota in 2011.

During his time here in Minnesota, Berger was moved around the offensive line, playing both guard positions and center—a versatile player that really helped power the Vikings up front.

In a statement to NFL network, Berger went on to say, “I was on some great teams before the Vikings, but it wasn't until I got to Minnesota that I really felt at home. For seven years, I was able to play for a great organization and in front of the best fans. U.S. Bank Stadium is an incredible place to play football. My family and I will forever be grateful for the opportunity I was given.”

Berger's retirement comes a day after the Vikings signed former Chicago Bears guard Tom Compton, so it appears that Compton will get a chance to compete for a starting job.

The offensive line is a position the Vikings are expected to target in the upcoming NFL draft as well.