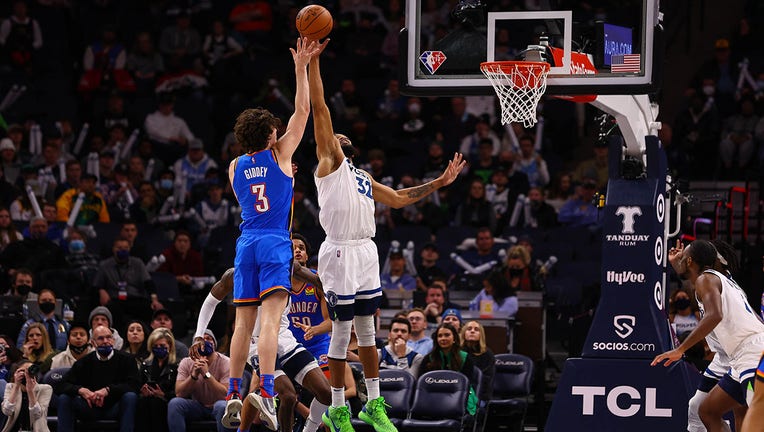 Karl-Anthony Towns #32 of the Minnesota Timberwolves blocks Josh Giddey #3 of the Oklahoma City Thunder during the fourth quarter at Target Center on January 5, 2022 in Minneapolis, Minnesota. (Photo by Harrison Barden/Getty Images)

MINNEAPOLIS, Minn. (FOX 9) - For the first time since Dec. 15, the Minnesota Timberwolves returned to its "normal" lineup versus the Oklahoma City Thunder on Wednesday night at Target Center.

The past few weeks featured an onslaught of positive COVID-19 tests that sent numerous players into health and safety-related protocols, and with them, little-used reserve players into starting roles.

Starting Pat Beverley, D’Angelo Russell, Anthony Edwards, Jarred Vanderbilt and Karl Anthony Towns, the Wolves led the rebuilding Oklahoma City Thunder by as many as 21 points Wednesday night before holding on for a 98-90 victory.

Russell returned with a cold shooting night, scoring only 6 points on 3-for-12 shooting (including 0-for-5 from the perimeter), Pat Beverley matched a season-high with five 3-pointers – one shy of a career high – for 20 points. Jaylen Nowell, playing over Russell down the stretch, added 16 points on perfect 6-for-6 shooting. Edwards ended the night with 22 points and five steals, only two games after he was benched against the Lakers for poor defensive effort.

The Wolves opened the game with a 16-4 run and led 30-10 after one. The hot start led to a congratulatory shove to the ground from Russell to Beverley that had the home crowd roaring.

The Timberwolves limited the Thunder to 36.7 percent shooting from the field. The Wolves have now won two straight after snapping a three-game losing streak, and are inching closer to .500 at 18-20.

The Timberwolves face the Thunder again Friday night in Oklahoma City to finish off the back-to-back.