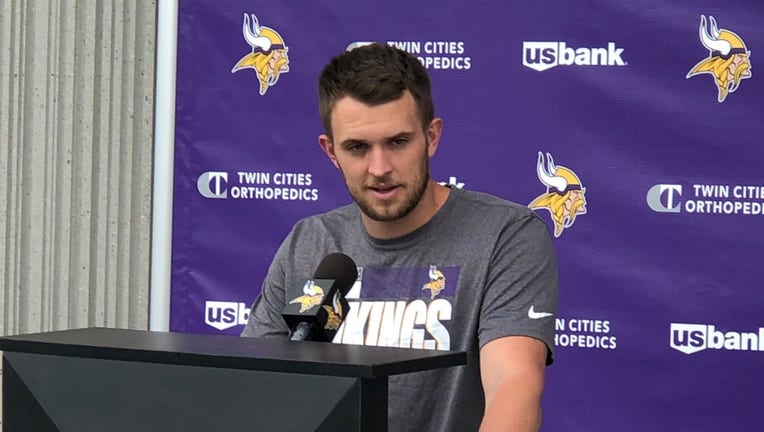 With three quarterbacks out due to COVID-19 protocols, Jake Browning got all the reps for the Vikings at Saturday night's practice at TCO Stadium.

Browning’s world likely turned upside down Saturday morning. The Vikings were getting set to host a night practice at TCO Stadium in front of fans, and COVID-19 had hit the team’s quarterback room. Kellen Mond reportedly tested positive, and Kirk Cousins and Nate Stanley were considered high risk close contacts.

Coach Zimmer frustrated as Vikings players miss out on practice due to COVID-19 protocols.

Coach Zimmer was again frustrated as some Vikings players missed out on practice due to COVID-19 protocols.

That means when the Vikings took the practice field Saturday night, Browning was the only quarterback available. It was his night to lead the offense, his time to show what he was capable of.

"I think that’s part of being a back-up in this league, you’ve always got to be ready. I’ve been preparing like that for two years, so the opportunity presented itself. I felt like I was ready," Browning said before Monday’s practice. "Gary Kubiak used to say nobody knows if you’re ready until you just get thrown in there. Try and make the most of those reps and really just take it one day at a time."

Eric Smith with Vikings.com charted Browning’s night. He finished 26-of-37, and had long completions to Adam Thielen, Justin Jefferson and K.J. Osborn. He led every team drill, and when it was time for 1-on1s and individual sessions, a combination of Klint Kubiak, Keenan McCardell and Andrew Janocko stepped in for extra arms.

Browning got a standing ovation from fans at the end of practice, and was even mobbed by teammates before they left the practice field.

He made the most of his night, though he said Monday he felt like it was an average practice and missed some things he normally executes.

"I look back at Saturday’s practice and I’ve had better practices than that, it just hasn’t been as large of a sample size and as many reps," Browning said.

"He’s a pretty confident kid. In one of the periods there was a break and I was walking over to the huddle and he said, ‘Don’t cut any reps,’" Vikings coach Mike Zimmer said. "So he wanted to get them all. He’s got a little bit of confidence I think."

Browning won 39 games as a starter at Washington in college, and after going undrafted, leaned heavily on Gary and Klint Kubiak when he came to the Vikings. He’s largely unknown, having spent two years on the scout team.

Saturday night might have been the start of his competing for the No. 2 quarterback job. As Zimmer put it Saturday, he’s available and that helps in being a back-up. We’ll find out throughout training camp and the preseason if Browning can emerge out of a quarterback pool that includes Nate Stanley and Mond behind Cousins.

He backed it up at Monday’s practice, hitting Thielen for a touchdown, completing a long throw to Jefferson and hitting Irv Smith Jr. for a leaping catch over the middle.

"With the situation the way it is, I just wanted to get as many reps out of it as I can," Browning said.

On Monday, the Vikings signed Case Cookus to have another body making throws with Cousins, Stanley and Mond not available.