LOS ANGELES - The MLS Cup Playoffs take center stage Thursday night at 8pm ET on FOX with a Western Conference Semifinal between Sporting Kansas City and Minnesota United. They’ve waited and watched the last few nights as three other teams have punched tickets to the Conference Finals, now the question is who will join Seattle, Columbus, and New England as the final four in the push towards MLS Cup 2020 (Dec 12, live on FOX at 8pm ET).

Sporting KC are used to being here: they’ve been in the playoffs eight of the last nine years, are the No. 1 seed in the Western Conference, and head coach Peter Vermes has brought them two titles, one each as a coach and player. And yet, they barely survived Round One against the No. 8 seed San Jose, seeing their stoppage time go-ahead goal wiped away in the 97th minute, before goalkeeper Tim Melia became the hero in the shootout. They’ll be hoping that another week gives star forward Alan Pulido enough time to recover from a knee injury that’s kept him out since the end of October. 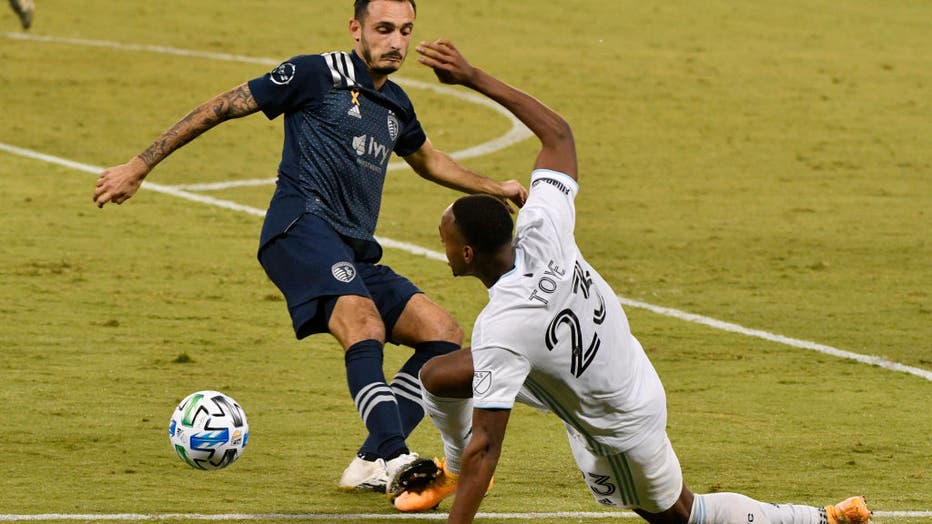 Roberto Puncec #4 of Sporting Kansas City clears the ball away from Mason Toye #23 of Minnesota United FC in the second half at Children's Mercy Park on September 13, 2020 in Kansas City, Kansas. (Photo by Ed Zurga/Getty Images)

The Loons from Minnesota are flying in rarified air: just their fourth year in the league after being an expansion team in 2017, they’ve just won their first-ever playoff game, and they won it in style. The 3-0 Round One victory over Colorado followed up a 3-0 win in the regular season finale, with Kevin Molino scoring twice in both games. Their recent offensive explosion has been led by recent acquisition Emanuel Reynoso, who continues the tradition of Maradona and Messi as an Argentine No. 10 who can create, score, and cause headaches for opposing defenders.

They’ve jokingly called this “The Nicest Rivalry in Sports” but Midwest friendliness will be put aside with a trip to the Western Conference Final, and a date with the defending champion Seattle Sounders, on the line.