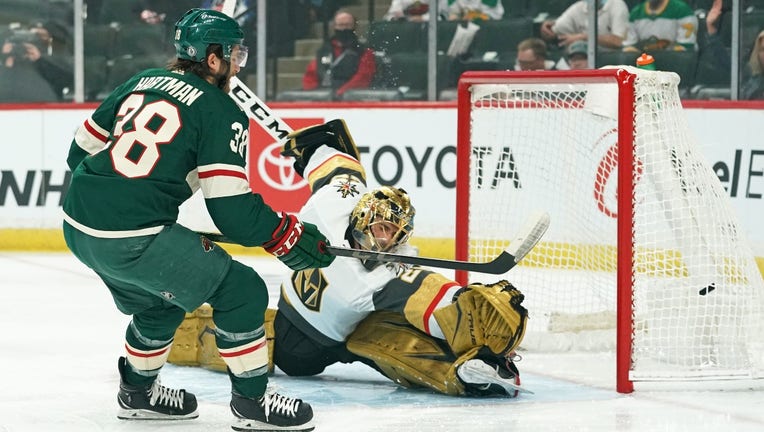 MINNEAPOLIS - The Minnesota Wild had their first home playoff game in three years Thursday night in front of 4,500 fans at Xcel Energy Center. But after a strong first period, everything fell apart in a 5-2 loss to the Vegas Golden Knights.

The Wild now trail in the series 2-1, and played arguably their worst two periods of the season after getting out to an early 2-0 lead. The Wild got early goals from Ryan Hartman and Joel Eriksson Ek, but the game turned when they had a chance to go up 3-0. Eriksson Ek appeared to score his second goal of the night on a rebound try, but it was disallowed after referees ruled the play was offside.

The Wild was offside because Kevin Fiala was being held and hooked at the offensive zone line, and there was no penalty called.

"Of course it would’ve been a great goal for us to have. I think we played well the first period, and the last two we’ve got to battle even harder for those bounces, work our a** off to get to those bounces and create those chances," Eriksson Ek said.

The Wild controlled the first period, with Hartman scoring off a pass from Kirill Kaprizov. After being held off the score sheet in Games 1 and 2, Kaprizov notched his first career playoff point. Eriksson Ek got his second goal of the series after Matt Dumba had a shot carom off the stanchion, deflect off Marcus Foligno and Eriksson Ek buried a loose rebound.

That’s where the offensive highlights ended for the Wild.

The Golden Knights scored three times in a nine-minute span in the second period to overcome the early deficit and take a 3-2 lead. Those goals came from Mark Stone, Patrick Brown and Reilly Smith.

The Wild had a chance to tie the game early in the third period on the power play, but didn’t generate a shot on goal and barely had puck possession for most of the man advantage. William Karlsson gave Vegas a 4-2 lead at the 17:36 mark of the third period, scoring on a 2-on-1 after taking the puck from Jared Spurgeon.

Stone scored his second of the night on an empty net with 59 seconds to play. The Golden Knights out-shot the Wild 40-16 on the night, including a 36-7 margin in the second and third periods. There’s no getting around it, the Wild was dominated over the final 40 minutes, allowing five goals, 36 shots and not possessing the puck enough to be an offensive threat.

"There’s puck battles everywhere. This is a time of year where you have to win every single battle, you have to. Every battle that you don’t win is an opportunity for the other team to get the puck and go down and perhaps score," defenseman Ian Cole said. "Desperation needs to be ratcheted up quite a bit, and we need to get better."

The Wild entered the night one of the best home teams in the NHL at 21-5-2. It's their first loss to the Golden Knights in regulation, after going 6-0-2 against Vegas in the regular season. The Wild also hasn't lost three straight games all year as it heads into Game 4.

Last season in the playoffs, they won Game 1 against Vancouver before dropping three straight to end the season.

The two teams are back at it for Game 4 Saturday at Xcel Energy Center, and the Wild will be desperate for a win to avoid having their season on the line.

"I think everyone is aware of the situation that we’re in, how crucial Game 4 is to this series and the difference in whether we lose Game 4 or win Game 4. There’s no secrets, there’s no secret recipe, it’s just a matter of will," Cole said.