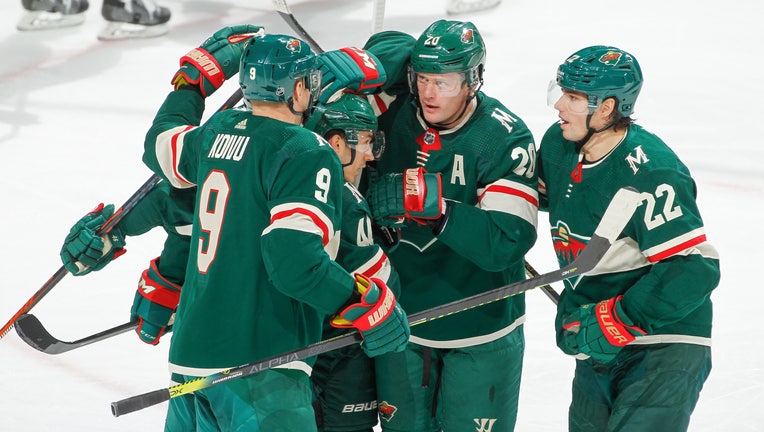 Ryan Suter #20 celebrates his goal with teammates Mikko Koivu #9, Jared Spurgeon #46 and Kevin Fiala #22 of the Minnesota Wild against the Toronto Maple Leafs during the game at the Xcel Energy Center on December 31, 2019 in Saint Paul, Minnesota. ((Photo by Bruce Kluckhohn/NHLI / Getty Images)

MINNEAPOLIS - The Minnesota Wild is getting one step closer to resuming the NHL season delayed more than three months due to the Coronavirus pandemic.

Wild GM Bill Guerin said players will begin voluntary small-group training at TRIA Rink in downtown St. Paul on Wednesday. The sessions will not be open to the public or media. It will be the first group sessions the team has held since the NHL suspended its season on March 11 due to the Covid-19 pandemic.

Wild players and team officials will comply with the NHL’s Phase II of the turn-to-play plan, meaning everyone allowed inside TRIA Rink will be tested for Covid-19 before entering the facility. Players will also have pre-practice medical evaluations before skating and working out at TRIA Rink.

The Wild’s practice facility has taken on measures to prevent the contraction of Covid-19, and has taken steps to make sure the facility gets cleaned and is sanitized regularly moving forward. Players will have a remote educational meeting before entering the facility.

Players will be able to skate in groups of up to 12, and they must practice social distancing in sessions both on and off the ice. Players will have specific arrival and departure times, and designated non-contact entry and exit points for the building.

The NHL recently announced training camps for the 24 teams involved in the league’s return-to-play tournament can start training camp as early as July 10. The league has not announced an official return date.

The Wild are one of the 24 teams in the tournament that will decide a Stanley Cup champion. They’ll be the No. 10 seed in the Western Conference and will face the No. 7-seeded Vancouver Canucks in a best-of-five series to advance to the playoffs. The top four teams in each conference will play each other in a round robin format for seeding in the first round of the playoffs.

We don’t yet know where games will be played if and when the NHL resumes play, but Minneapolis/St. Paul was reportedly eliminated as a potential hub city on Monday.