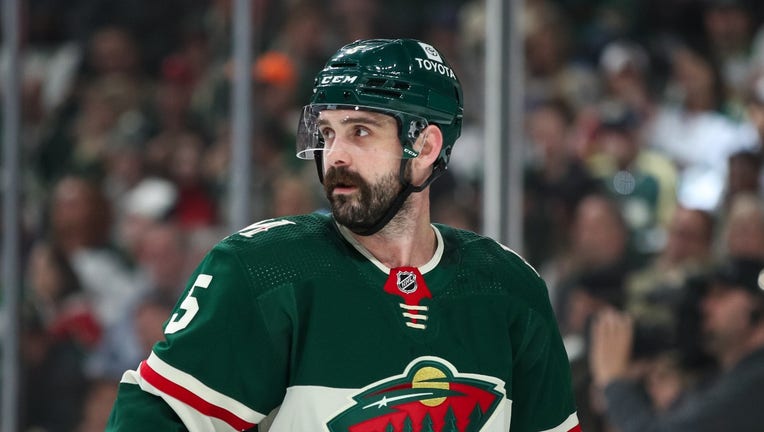 Jacob Middleton #5 of the Minnesota Wild look son against the St. Louis Blues in the first period in Game Five of the First Round of the 2022 Stanley Cup Playoffs at Xcel Energy Center on May 10, 2022 in St Paul, Minnesota. The Blues defeated the Wil ((Photo by David Berding/Getty Images))

MINNEAPOLIS - Jake Middleton remembers what it was like in 2014, fighting for a spot on an NHL roster. He was the last pick in the NHL Draft that year.

The Wild, who acquired Middleton last year in the trade that sent goalie Kaapo Kahkonen to the San Jose Sharks, announced on Wednesday they’ve signed Middleton to a three-year extension. The deal is worth $7.35 million, and he’s now under contract through the 2023-24 season.

"You guys know highly I spoke of this organization and the team and the guys. A little bit of security for myself and my fiancée as well. It’s nice, we’re very happy to be here," Middleton said Thursday, speaking from an apartment in the North Loop he’s renting from teammate Alex Goligoski.

The defenseman was paired with captain Jared Spurgeon last season, and it didn’t take long for the two to form a chemistry. In 21 games with the Wild last season, Middleton had one goal and four assists, had 35 blocks and 29 hits. He averaged nearly 18 minutes of time on ice.

Spurgeon was one of the first teammates to reach out and congratulate him.

"It’s kind of that yin and yang, right? What is it, 5-10 with 6-4? Big and small, no facial hair and facial hair. I think it’s just one of those opposites attract kind of things and I think that’s what’s been working so well," Middleton said.

Wild general manager bill Guerin said the deal was earned, and easy to do as both the Wild and Middleton wanted to get it done.

"I think it’s a lot to do with him and his personality, and the way he fit in with all the guys. Obviously his play is something that speaks for itself. He was a really good fit with Spurge. It just seemed like a really good fit," Guerin said.

So how is Middleton celebrating his new deal and stability with the Wild? He’s getting married to his fiancée, Natalie, next weekend in Nashville. Both families have had the trip planned for a long time.

"We got engaged a couple months ago, we’ve been together 10 years, so we figured it was a good time to tie the knot," Middleton said.

With the NHL Draft starting Thursday night, Middleton’s extension is a good reminder that you don’t have to be a star to have a successful career in the NHL.

"I imagine there are some guys who are draft eligible this year who might have been looking at the draft and they might be fringe players or not drafted at all. For a day before it to come out that a guy who was the last overall pick signs a three-year extension with an NHL team might give them a little added juice," Middleton said. "If they put the work in, they can do the same thing."

The Wild and general manager Bill Geurin announced before the start of Thursday's NHL Draft that they've re-signed goaltender Marc-Andre Fleury to a two-year, $7 million contract. The Wild added Fleury before the NHL trade deadline last season to pair with Cam Talbot, then started Fleury against the St. Louis Blues. It didn’t translate into a deep playoff run. Fleury had been a free agent after going 9-2 in 11 regular season games with the Wild, with a 2.74 goals against average and a .913 save percentage.

Playing with the Wild in the Stanley Cup Playoffs last year was his 16th straight postseason appearance, which is the most by a goalie in NHL history. He also reached 25 wins last season for the 13th time in his career. Only Martin Brodeur have more.