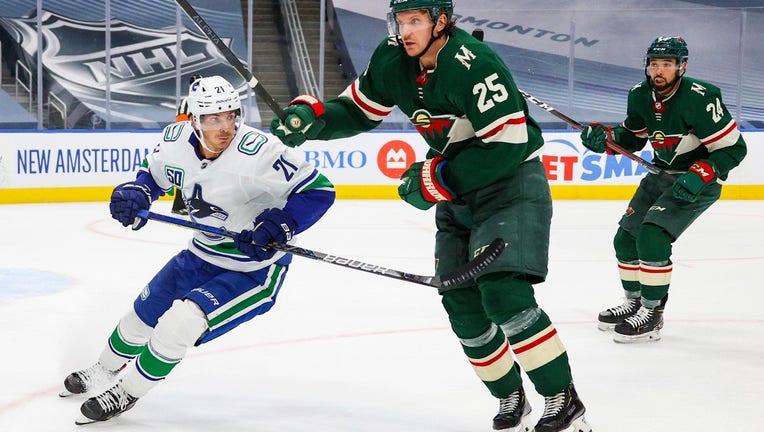 Loui Eriksson #21 of the Vancouver Canucks skates against Jonas Brodin #25 of the Minnesota Wild during the second period in Game Three of the Western Conference Qualification Round at Rogers Place on August 06, 2020 in Edmonton, Alberta.  ((Photo by Dave Sandford/NHLI via Getty Images))

MINNEAPOLIS - The Minnesota Wild is scheduled to host the St. Louis Blues in the NHL Winter Classic on Saturday at Target Field, and they could be without at least one of their top defenseman.

NHL confident Winter Classic in Minneapolis will go on, despite COVID-19 worries

As the new variant cancels some professional sports contests, the NHL says it expects the Winter Classic planned for New Year's Day in Minneapolis to go on without a hitch.

The Wild announced Tuesday morning that Jonas Brodin has been placed on the NHL COVID-19 list. Brodin practiced on Sunday with the team, then missed practice on Monday. The NHL put the season on pause last week, and postponed Monday night’s games, as several teams across the league are dealing with positive COVID-19 cases.

On Sunday, the Blues put four players on the team’s COVID-19 list.

The Wild is already without captain Jared Spurgeon and center Joel Eriksson Ek due to injuries. In 28 games, Brodin has three goals and 11 assists, and is one of the team’s top defenders.

The Wild has had games this month against the Carolina Hurricanes, Florida Panthers and Detroit Red Wings to due COVID-19 issues with all three opponents. Their game against the Winnipeg Jets was postponed due to the league’s pause. The NHL has had 70 games postponed this season due to the pandemic.

Minnesota is in a three-way tie for the top spot in the Western Conference at 40 points, with a 19-9-2 record. It remains to be seen if Brodin’s case will cause a spread within the Wild, and potentially impact the NHL Winter Classic.

WILD’S JANUARY 10 GAME AT WINNIPEG TO BE RESCHEDULED

The Minnesota Wild is getting ready to host the NHL Winter Classic on Saturday, but future schedule changes continue amid the COVID-19 pandemic. The Wild was scheduled to play at the Winnipeg Jets on Jan. 10, but the team announced Tuesday that game will be rescheduled.

The NHL is rescheduling nine games in Canadian cities due to attendance restrictions. New game dates will be announced when the restrictions can be lifted. Those dates have not been established.