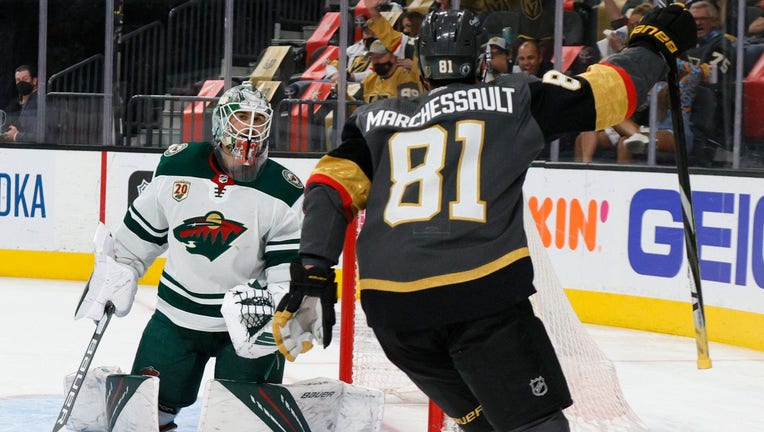 MINNEAPOLIS - The Minnesota Wild and Vegas Golden Knights head to St. Paul Thursday night with their playoff series tied 1-1 after the Golden Knights got a 3-1 victory Tuesday night at T-Mobile Arena.

The story for the second straight game was the Wild's inability to get the puck past Marc-Andre Fleury, who made 34 saves and kept the Golden Knights in the game in the first period after strong push from Minnesota to start the game. Fleury made 29 saves in Game 1, and was perfect in regulation before the Wild won in overtime.

The Wild out-shot the Golden Knights 17-10 in the first period Tuesday, without a goal to show for it, and 35-28 for the game.

"He was unbelievable. We’re encouraged, my gosh. We loved our start, we loved the whole game. The game was fantastic, they’re going to be like that the rest of the way. For sure there was encouragement," Wild coach Dean Evason said.

The Wild got the first goal as Matt Dumba scored on a wrist shot at 12:08 of the second period off a feed from Jonas Brodin, with Marcus Foligno screening Fleury. The Golden Knights answered with a pair of goals five minutes apart to take a 2-1 lead after two periods. Jonathan Marchessault scored 18 seconds after Dumba’s goal,, at the 12:2 mark, to tie the game 1-1.

That ended a 95 minute, 45 second scoreless streak for Cam Talbot. It's the second-longest shutout streak in Wild playoff history.

Vegas got the eventual game-winner about five minutes later from former Wild player Alex Tuch, who scored off a feed in front of the net from Mattias Janmark after Talbot saved Alex Pietrangelo’s initial shot on goal.

The Wild was pushing in the third period with an extra attacker in the final two minutes to try and get the tying goal, but Kirill Kaprizov was sent to the penalty box for tripping with 90 seconds to play. Tuch got his second goal of the night off a feed from Chandler Stephenson on the power play with 50 seconds to play, sealing the win for the Golden Knights.

Tuch spent one season with the Wild before going to Vegas for their inaugural season in 2017.

The Wild had their chances Tuesday, out-shooting Vegas 35-28 for the game and 17-10 in the first period. Kaprizov, who led the Wild in scoring entering the Stanley Cup Playoffs, has five shots on goal, no goals and a costly penalty. He tallied eight points against the Golden Knights in the regular season, but has yet to get on the score sheet in two playoff games.

In addition to the goal, Dumba had eight blocked shots in Tuesday’s loss, four in the first period. Kevin Fiala also had eight shots on goal and five hits. But the reality is the Wild has two goals in two games, and they'll need more offense going forward.

"It’s the playoffs so I’m not surprised it’s low scoring. That being said, we’re going to need to score more than one a night to beat this team in a seven-game series," Nick Bonino said.

The big question will be if veteran forward Zach Parise returns to the lineup. Parise, who was a health scratch twice earlier this season, hasn’t played in either game of the playoff series so far.

Dumba is confident the Wild can bounce back.

"We’re not proving anything to ourselves, we know the level we can play at. You’re going to see a totally different team, evem at home, we’re a different beast," Dumba said.