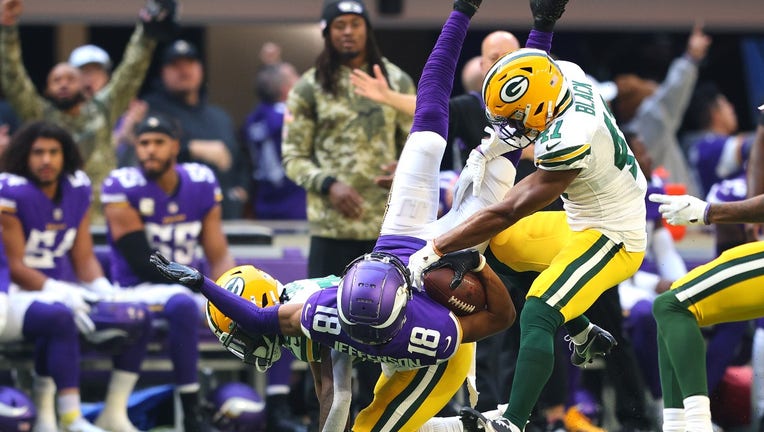 Darnell Savage #26 and Henry Black #41 of the Green Bay Packers bring down Justin Jefferson #18 of the Minnesota Vikings after a reception in the first quarter at U.S. Bank Stadium on November 21, 2021 in Minneapolis, Minnesota.  ((Photo by Adam Bettcher/Getty Images))

MINNEAPOLIS - Harrison Smith couldn’t watch from the sideline. Most Minnesota Vikings fans at U.S. Bank Stadium on Sunday probably either had their hands covering their eyes, or praying.

Fans on social media were posting, "What could go wrong?" as Mike Zimmer drained the clock, forcing Aaron Rodgers to stand on the sideline and watch as Greg Joseph trotted out for a potential game-winning field goal. That’s exactly where Zimmer wanted Rodgers as the Vikings and Green Bay Packers exchanged blows in the second half.

There's nothing like a good battle between rivals like the Minnesota Vikings and Green Bay Packers. Ahead of Sunday's game, we checked in with fans excited for the big game.

Zimmer left a key NFC North Division game between bitter rivals up to his kicker. He missed Week 2 with a chance to walk off Arizona, but on Sunday Joseph launched a 29-yard field goal inside the right upright to send the Vikings to a 34-31 win over the Packers in front of nearly 67,000 fans, the second largest crowd in the history of U.S. Bank Stadium. The Vikings are back to .500 at 5-5, and back into the NFC Playoff conversation. The path to getting to Sunday’s win was just as thrilling as the finish.

All but one Vikings’ game this season has either finished within one possession, or come down to the final play.

The winning kick was set up after Cousins thought he had a deep pass for Jefferson intercepted. The Packers had just tied the game on Aaron Rodgers’ 75-yard touchdown to Marquez Valdes-Scantling. But Darnell Savage didn’t complete the interception, the Vikings kept the ball and Cousins went to work getting the Vikings down the field. Minnesota got to the Packers’ 6-yard line before Zimmer opted to go into victory formation, and drain the clock.

Zimmer wasn’t going to give Rodgers another chance, and Joseph came through after missing an extra point earlier in the game. Rodgers finished the day with 385 yards and four touchdowns. Valdes-Scantling had four catches for 123 yards and a touchdown, and Davante Adams had seven catches for 115 yards and two touchdowns.

"We hadn't stopped him (Rodgers) the whole second half and I didn't want him to get the ball back. I figured the best way to win the game would be with him on the bench," Zimmer said.

The Vikings responded after letting a 13-point second half lead slip away. They’re the only team in the NFL to have at least a seven-point lead in every game this season. Yet they’ve had to fight, scratch and claw for all five of their wins.

The Vikings took an early 9-3 lead on Cook’s 1-yard touchdown, set up by Jefferson’s 56-yard catch on a deep ball from Cousins. That lead grew to 16-3 after Cousins hit Thielen for a 10-yard touchdown in the second quarter. That was three plays after Cousins was intercepted, but the turnover was negated by a Green Pay roughing the passer penalty.

The Packers trimmed it to 16-10 before the end of the first half after Rodgers hit Josiah Deguara for a 25-yard touchdown. That continues a disturbing trend for Zimmer of the defense giving up points late in the half. They’re last in the NFL with 59 points allowed in the last two minutes of the first half.

The Vikings got their lead back to two scores with an eight-minute drive to open the second half. Cousins hit Jefferson, who started the play in the backfield, for a 9-yard touchdown and 23-10 lead. That’s when the Packers rallied, behind No. 12.

He hit Adams for a 10-yard touchdown, then for an 18-yard score to give the Packers a 24-23 lead with 7:49 to play. On the go-ahead touchdown, Rodgers tried to call a timeout before the play, but the ball had already been snapped before he hit Adams. It had the Vikings' sideline fuming.

Cousins and the Vikings punched back, hitting Jefferson for a 23-yard touchdown and a 31-24 Vikings’ lead after Cook ran in a two-point conversion. Jefferson had his 11th career 100-yard game, which ties Randy Moss and Juju Smith-Schuster for second-most in a player's first two seasons since 1970. Jefferson is becoming one of the top receivers in the NFL, and he wore a Randy Moss t-shirt during pregame warm-ups.

"That’s the same type of mindset that I have. Just trying to be a legend, just trying to make big plays. Why not carry after him? He’s one of the best in the game. I just love playing this game, love the rivalry, love these intense, big games. It’s what I live for," Jefferson said.

"I heard him say the other day he lives for games like this. That’s kind of what he is. I saw him this week during the week and talked to him a little bit. He said after the game, ‘I told you I got you coach.’ That’s the kind of guy you love to have. He’s a great competitor," Zimmer said.

It took the Packers one play to answer. Valdes-Scantling beat Xavier Woods in coverage, and Rodgers hit him in stride for a 75-yard, game-tying touchdown with 2:08 to play. Rodgers and Zimmer have a mutual respect for one another, and Rodgers wouldn’t let the Packers go down without a battle.

"Sundays are not fun. You know how they say Sunday is fun day? It’s not, at all. Like I said the other day, every play with this guy (Rodgers) is a fight," Zimmer said. "You just hope when they go down and score in one play that the offense can come back and do what they did. I was proud of them for that."

The Vikings are currently the No. 6 seed in the NFC after the Carolina Panthers and New Orleans Saints each lost Sunday. Minnesota handed Green Bay its first division road loss in three years.

"5-5 keeps you in the hunt but it’s going to take more to get you in the playoffs," Cousins said.