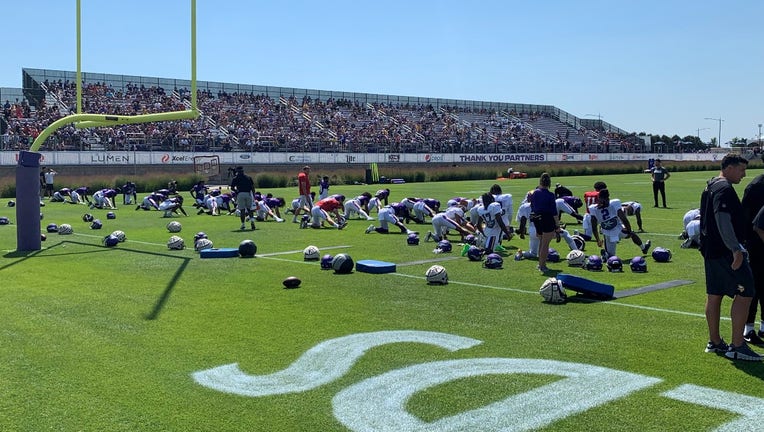 MINNEAPOLIS - The Minnesota Vikings are nearly two weeks into training camp, have had five padded practices and had their annual night practice on Monday at TCO Stadium.

They head to Las Vegas to face the Raiders in their first preseason game on Sunday, and the team released its first unofficial depth chart on Wednesday. Here’s a look at what to glean from the first depth chart:

Minnesota Vikings fans got a look at the new team Monday in a night practice under the lights at TCO Performance stadium in Eagan. FOX 9’s Jim Rich offers an inside look at the action.

Kirk Cousins is the clear and obvious starter. The Vikings list the back-ups as Kellen Mond "or" Sean Mannion. Both have taken second-team reps in camp, and neither has clearly won the No. 2 job. Mond fumbled another snap in the Monday night practice, and was nearly picked off by Cameron Dantzler. Mannion has had mostly short throws in team situations.

Dalvin Cook is the starter without a doubt. The back-ups are listed as Alexander Mattison, Kene Nwangw, Ty Chandler and Bryant Koback. Mattison has taken all the second-team reps and looked good. Nwangwu had a touchdown run in his first practice back from injury, and will likely play a big role on special teams.

Justin Jefferson and Adam Thielen are the clear-cut starters. KJ Osborn appears to be the front-runner for the No. 3 receiver, getting a push from Bisi Johnson, Ihmir Smith-Marsette and Trishton Jackson.

Irv Smith Jr. is the listed starter. That’s despite being out for the rest of training camp and probably all of preseason after having wrist surgery following the team’s first practice in pads. Johnny Mundt, Ben Ellefson and Zach Davidson are the back-ups with the best chance of making the 53-man roster.

The starters also seem clear on the defensive line, with a new 3-4 look. Dalvin Tomlinson and Armon Watts are considered the defensive ends, with Harrison Phillips playing nose tackle.

Danielle Hunter and Za’Darius Smith are the edge rushers, considered outside linebackers in the 3-4 look. Patrick Jones II and D.J. Wonnum will provide the depth. The inside linebackers are veterans Eric Kendricks and Jordan Hicks. Troy Dye and rookie Brian Asamoah are the next in line for game snaps.

Patrick Peterson and Cameron Dantzler are listed as the starters on the outside. The back-ups are Chandon Sullivan, rookie Andrew Booth Jr., Kris Boyd and rookie Akayleb Evans.

Harrison Smith and Cam Bynum are the listed starters. The back-ups are rookie Lewis Cine, and Josh Metellus.

There are no changes from last year among the specialists. Greg Joseph is the kicker, Jordan Berry is the punter and holder and Andrew DePaola is the long snapper. Joseph has had an outstanding training camp, including making 7-of-8 in live sessions Mondauy night. He’s made multiple kicks from over 50 yards. Kene Nwangwu is listed as the kickoff returner, and Ihmir Smith-Marsette is the starter at punt returner.