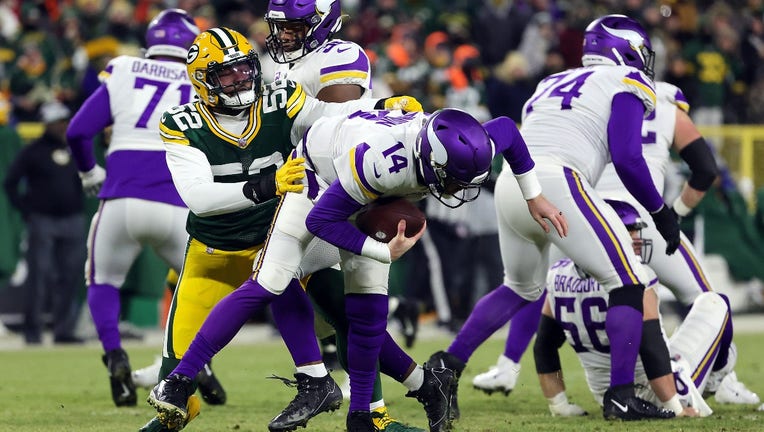 Quarterback Sean Mannion #14 of the Minnesota Vikings is sacked by outside linebacker Rashan Gary #52 of the Green Bay Packers during the 2nd quarter of the game at Lambeau Field on January 02, 2022 in Green Bay, Wisconsin.  ((Photo by Stacy Revere/Getty Images))

MINNEAPOLIS - The Minnesota Vikings were eliminated from NFC Playoff contention after a 37-10 loss to the Green Bay Packers Sunday night at Lambeau Field.

With the win, the Packers earned the No. 1 seed for the playoffs and a first round bye. The Vikings had their season on the line, with the Eagles winning earlier in the day, and had to turn to Sean Mannion at quarterback with Kirk Cousins on the reserve/COVID-19 list.

"I felt totally prepared, that’s the job. Seven years in my career, you spend every single day preparing like you’re the starter. I absolutely felt prepared," Mannion said.

Mannion finished 22-of-36 for 189 yards and a touchdown to KJ Osborn at the end of the third quarter, with the game decided. One of Mannion’s longest completions of the night? To center Garrett Bradbury for 21 yards, after it deflected off Tyler Conklin. Mannion led the Vikings in rushing with two carries for 14 yards. They finished with just 27 for the game, averaging only 2.5 per carry.

"I feel like we didn't give ourselves a chance. We got away from the running game way too soon. I don’t think we stuck with it enough to be honest with you," Vikings coach Mike Zimmer said after the loss.

The Vikings had four straight 3-and-outs in the first half while managing 70 total yards. They finished with 11 first downs, 206 total yards, were 2-of-12 on third down and had a turnover on downs. The Vikings averaged four yards per play. The Packers had 481 total yards, averaging 6.5 per play.

With Cousins not available due to COVID-19, Zimmer turned to Mannion instead of rookie Kellen Mond, a third round pick. Mond played one series in the fourth quarter Sunday night, going 2-of-3 for five yards while Mannion dealt with a cramp in his hand on the sideline.

Does Zimmer want to see Mond play next week in the regular season finale against the Bears?

And why is that?

"I see him every day," Zimmer said.

After the Packers had four early red zone trips end with just three points, Aaron Rodgers woke up. He finished 29-of-38 passing for 288 yards and touchdowns to Allen Lazard and Davante Adams, who finished with 11 catches for 136 yards. Both scores came in the second quarter as the Packers piled up 299 yards and built a 20-3 lead at the half.

A.J. Dillon scored a pair of second half touchdowns to put the game away for the Packers on a frigid night at Lambeau Field. Green Bay pounded the Vikings’ run defense for 174 yards, and 5.3 yards per carry.

For the fifth time in eight seasons under Mike Zimmer, the Vikings won’t be involved in the postseason. It’s the first time the Vikings will have missed the playoffs in consecutive seasons under Zimmer, and third in the last four years. The Vikings have not been above .500 at any point in the past two seasons. It begs the question of if Zimmer will return for the 2022 season, and if he doesn’t, if General Manager Rick Spielman might be joining him on the hot seat.

"You’re judged off ‘Ws’ in this league, but I believe Zim is a great head coach. Has a great connection with his team. A lot of those games, we just wasn’t able to finish. At the end of the day, that’s not a coaching problem. As players, we have to go out there and execute the plays that’s called upon us to make the play or survive that down," defensive back Patrick Peterson said. "As players, we have to look ourselves in the mirror as well to come out and play better. Coaching decisions, coaching changes, that’s something that’s out of our control. That’s up to upper management, but Ithink Zim is definitely the guy for the job."

The Vikings (7-9) suffered their first blowout loss of the season Sunday night after 15 of the first 16 games finished within one possession or came down to the final play. A lackluster performance in all phases came with everything on the line, something that’s happened too often under Zimmer in the most critical games.