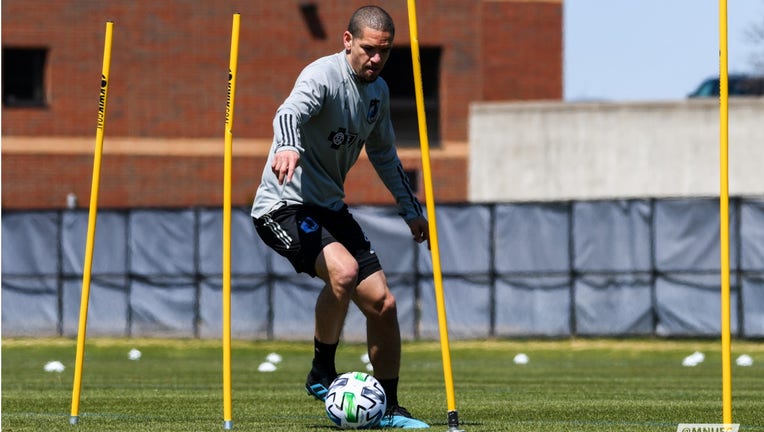 Minnesota United held its first voluntary individual training session since the MLS suspended its season in mid-March on Tuesday at the National Sports Center in Blaine. ((credit: Minnesota United))

MINNEAPOLIS - Exactly two months after having their season suspended due to the Coronavirus pandemic, Minnesota United got back on the field on Tuesday.

The Loons hosted individual training for players, in accordance with Major League Soccer and local guidelines, at the National Sports Center in Blaine. The workouts are voluntary, and it’s the first time players will be back on the field since the MLS suspended play.

Exactly two months after having their season suspended due to the Coronavirus pandemic, Minnesota United got back&nbsp;on the field on Tuesday.

Minnesota United was 2-0 on the season with a pair or road wins and about to start a four-game home stand at Allianz Field when MLS was among several leagues to stop or cancel play due to the Covid-19 pandemic. Since, players have been doing individual workouts on their own at home.

"The guys have been training since the San Jose game. Some people thought we were maybe just starting again today. These guys have been training every single day since the San Jose game," Loons coach Adrian Heath said after Tuesday's training session. "To get them outside on the grass and just to see them again for me has been a big, big plus. Getting them out back in their familiar training facility working in front of the coaches again I think will be a huge boost for the players."

Starting Tuesday, the team has established protocols for players, coaches, trainers and essential staff to host individual workouts at the National Sports Center. Players are arriving at staggered times, driving their own vehicles and going straight from their parked spaces to the practice fields. All indoor team facilities remain closed.

Players will have their temperature taken and must use hand sanitizer before entering the practice field. Non-player personnel are required to wear masks and gloves on their hands. The practice field is divided up into eight sections, each separated by 10 feet, and one player is assigned to each section.

Athletes can take shots on goal, but not on goalkeepers, and all training equipment will be sanitized between sessions. Players will also leave training at staggered times, and everyone at the facility must complete a contract tracing survey so there is record of everyone at the National Sports Center on a daily basis.

"It was great, we had a beautiful day here in Minnesota and it was great to be able to see some of the guys in person and not have to do it over a Zoom call," midfielder Ethan Finlay said. "Many guys were happy to be back, it was all smiles today so we’re making progress. To see some of the guys and see the coaches from afar, talking to them from afar and just talking soccer has been fun."

Other MLS teams around the league started voluntary individual training on Monday.

So when could we see the Loons back in action on the pitch? The short answer is we don't know. The league remains in a moratorium for all team activities until at least May 15.