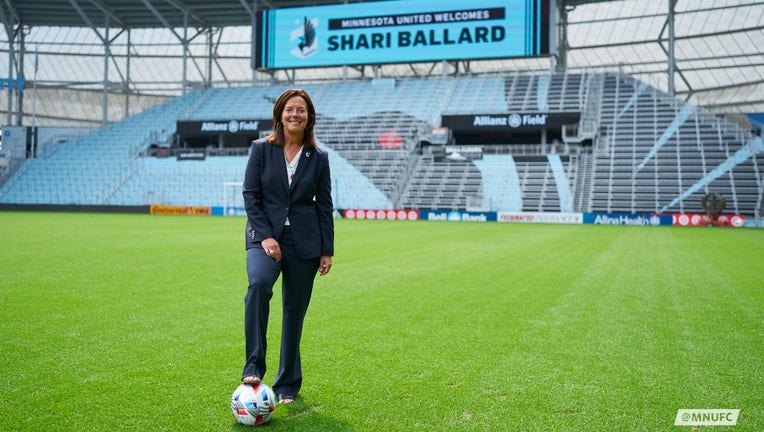 MINNEAPOLIS - Minnesota United officials announced on Tuesday that former Best Buy executive Shari Ballard will take over as the club’s new CEO after the 2021 season.

Ballard, who spent more than 25 years at Best Buy before retiring in 2019, will replace Chris Wright, who will conclude four years with the Loons at the end of the 2021 season. Wright helped oversee the opening of Allianz Field, and has been a front office leader for a franchise that's seeking its third straight Major League Soccer playoff appearance this season.

Ballard was introduced as Minnesota United's new CEO at a news conference on Tuesday at Allianz Field.

"Shari is an extraordinary individual whose personal character, commitment to people and our community, passion for sports, and exceptional experience leading and working with others to grow and strengthen a locally-based, international company and brand is without reproach,’ managing partner Bill McGuire said in a statement. "Her accomplishments speak for themselves, and I am humbled and proud that the MNUFC family – still young but having already accomplished much, and with so many engaged and passionate individuals, outstanding corporate and community partners, the greatest fans in MLS today, and values that emanate from the great sport of soccer and its global lessons – is something that attracted her to help us realize even greater things and relevance in the future."

Ballard started her professional career at Best Buy in 1993 and by 2007, was responsible for retail in all company stores across the U.S. She also oversaw business and transformation efforts in Canada, China, Europe and Mexico. Ballard became the president of U.S. Retail in 2017.

"The values of the club and the value system of the club were very much a personal and professional fit for me. I love winning, I love competing. So the winning aspect of the club and what it takes to do that and to be in a world where you compete, I love that. It’s super attractive to me," Ballard said. "It’s an opportunity fundamentally to take something that’s working at the core and help it reach its next level of ambition. Retail was a daily knife fight in a phone booth because it was so competitive. It was that for 26 years and I loved it."

Ballard is also on the Board of Directors at Ecolab, PetSmart and Allina Health, and is on the Board of Trustees for the University of Minnesota Foundation. She was named one of Fortune Magazine’s "Fifty Most Powerful Women in Business" four times, including three straight years from 2015-17.

She also talked about her excitement to take in Allianz Field, one of the top fan venues in MLS.

"The stadium experience here is ridiculous in a great way. What’s been created here and what is created in this stadium experience, I’m a complete homer on it, but it’s magic. Who wouldn’t want to be a part of that?" Ballard said. "We’re going to do our best. I’m going to do my best, the team is going to do their best. But you’ll get everything I’ve got in terms of trying to honor what’s been built here and to just keep taking it to newer and newer levels. What’s been built here is utterly remarkable."