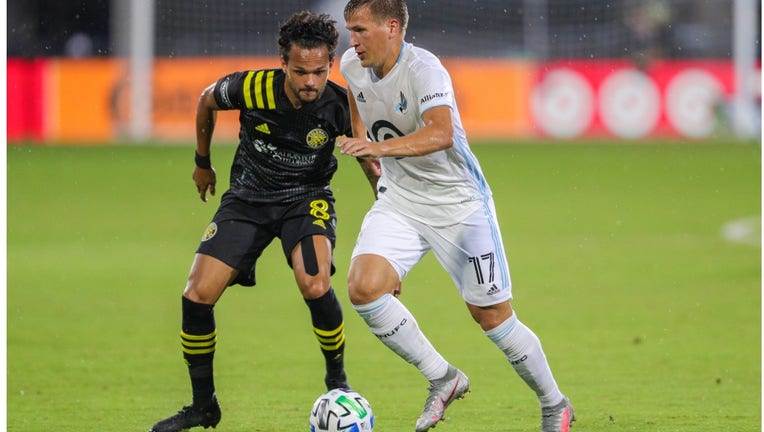 Minnesota United entered the knockout stage of the MLS is Back Tournament facing a Columbus Crew squad that not only went 3-0 to win Group E, it hadn’t allowed a regulation goal in the tournament.

Columbus entered the game as the favorite on paper, but the Loons sent them home with a win in penalty kicks after playing to a 1-1 tie in regulation. Minnesota United now advances to face the San Jose Earthquakes in the MLS is Back quarterfinals Saturday night.

Players celebrated in the locker room after, singing “Wonderwall,” which is what the team and fans do after wins at Allianz Field.

“It took probably our best performance, certainly since we’ve been down here to do that. If we hadn’t done that, we wouldn’t have gotten the result tonight. I’m really happy for the group,” coach Adrian Heath said after the win. “I said to them before the game, ‘We’ve been here four weeks, what’s another two weeks going to take?’ Let’s stay in the competition, we’re here and now let’s see if we can go and win it.”

Minnesota United did what no other MLS team could do in the tournament: Find the back of the Columbus net. The Loons took a 1-0 lead in the 17th minute as Robin Lod was in the right place at the right time after a deflection from Jose Aja on a corner kick.

It was yet another goal on a set piece for the Loons.

“It always feels good to score. The game was really good for us as a team. We’ve worked so hard, today was my turn to score a goal but more importantly, we went through as a team,” Lod said.

Columbus controlled the ball for much of the second half, but didn’t generate many quality scoring chances. They got the equalizer in the 78th minute after Aja was called for a foul in the penalty box, resulting in a penalty kick.

Tyler Miller made the initial save on the Gyasi Zardes penalty shot, but the rebound came right back to Zardes and he had a wide open net to tie the game 1-1.

The game went straight to penalty kicks with game tied after 90 minutes of regulation and stoppage time. Ozzie Alonso, Jan Gregus, Aaron Schoenfeld, Raheem Edwards and Chase Gasper all found the net. Gregus, Schoenfeld and Edwards all went inside the right post, while Alonso and Gasper rifled shots up the middle. Gasper’s shot ended up being the game-winner.

“I just said to them be positive whatever you do. I just wanted them to be positive and put the foot through it and make sure if the keeper is going to save it, it’s going to be a really good save,” Heath said.

The Loons also got a big save from their keeper. On Columbus’s fourth attempt, Miller guessed right, diving to his right and getting both mitts on the shot for the save. Miller said after it’s about having confidence.

“For me I’m relaxed. I know all the pressure is on the shooter. I told our guys before just to pick your spot, stick with it and be confident. In PKs, a lot of it just comes down to your confidence,” Miller said. “I knew if I could make one save to help our team that my guys would be able to come through, and they did.”

Minnesota United is now two wins away from playing for a title. San Jose is next, and the Loons beat the Earthquakes 5-2 back on March seventh before the MLS suspended the season.