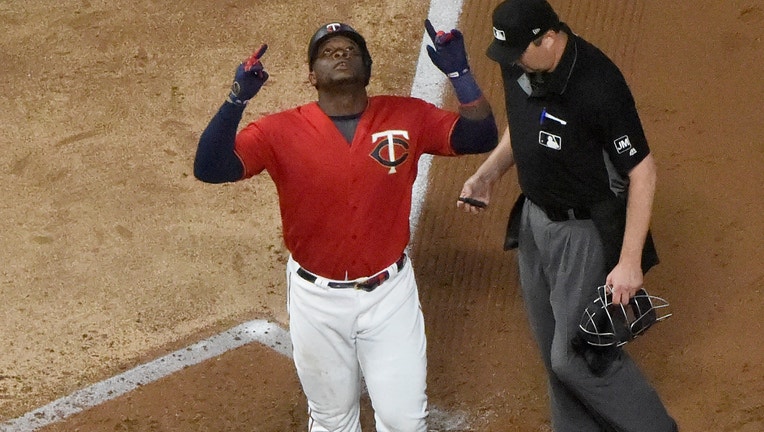 Miguel Sano #22 of the Minnesota Twins celebrates hitting three-run home run against the Chicago White Sox as teammate Eddie Rosario #20 looks on during the third inning of the game at Target Field on September 17, 2019 in Minneapolis, Minnesota. (Hannah Foslien / Getty Images)

MINNEAPOLIS - There were a few noticeable faces missing when the Minnesota Twins started summer training at Target Field last Friday.

Two were Willians Astudillo and Miguel Sano. Team officials confirmed over the weekend that Sano will have to miss the start of summer training after testing positive for Covid-19. In a video released on the Twins’ Twitter account on Sunday, Sano is in good spirits and says he feels great.

“I know I get positive in the test for Coronavirus, but I don’t have any symptoms in my body and I want to tell everybody how I feel. I feel great, and I don’t have any problems. As soon as I get cleared, I go back to the field. I miss my team, I miss my fans. 2020, we love you,” Sano said.

Sano is asymptomatic and is in self-isolation. He can’t practice with the Twins until he gets two negative Covid-19 tests in a 24-hour span. Sano played in 105 games for the Twins last year between third base, first base and designated hitter. He hit .247 with 34 home runs and 79 RBI.

Sano will play primarily first base and spend some time at DH when Nelson Cruz doesn’t after the Twins signed free agent slugger Josh Donaldson in the off-season. In part of Donaldson’s recruitment process, Sano said he would be more than happy to play at first base if it meant the Twins were signing Donaldson.

It’s been a bit of a rollercoaster of an off-season for Sano, who went back to the Dominican Republic after players were told to leave Spring Training back in March due to the Covid-19 pandemic. Major League Baseball was two weeks away from Opening Day at the time.

Sano had been accused of being involved in a kidnapping plot in the Dominican Republic in recent weeks. According to reports out of the area, Sano said he was being blackmailed for money, and accused his accuser of sexually assaulting his 8-year-old stepbrother. Sano was cleared of any wrongdoing or complaints in the case about two weeks ago, and flew to Minneapolis on time to be with the Twins before testing positive for Covid-19.

One other notable name absent from workouts over the weekend was outfielder Byron Buxton, who was with his wife as they welcomed their second child. He arrived to Minneapolis on Sunday and is expected to workout with the Twins this week, once he clears Covid-19 testing and protocols.

He should be fully-healthy to play from Opening Day as the three-month layoff in quaranted gave Buxton time to heal his surgically-repaired shoulder. He missed the last month and the playoffs last year after needing surgery, but has since posted social media videos in the off-season taking swings while in quarantine.