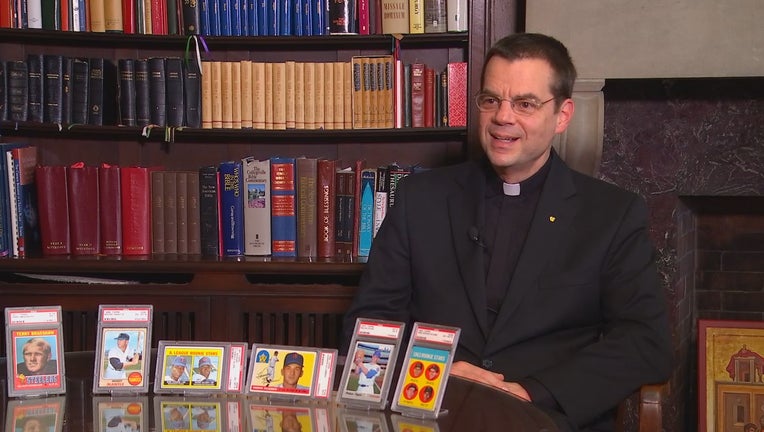 Fr. John Ubel is preparing to sell his sports cards collection at auction to raise money for the Aim Higher Foundation. (FOX 9)

ST. PAUL, Minn. (FOX 9) - The Lenten season is one of the most revered times of year at the Cathedral of St. Paul.

During this 40 days and 40 nights stretch of sacrifice, Fr. John Ubel is giving up something he’s had for more than 40 years.

A Minnesota priest is preparing to sell his prized antique baseball card collection to raise money for a good cause.

"It’s closer to 50 years, actually," Ubel told FOX 9 with a smile. "That’s the thing about collecting, it brings you back to a point in time."

The time has come for Ubel to auction off his prized sports cards collection, ranging from a 1948 rookie Jackie Robinson card to another of Hank Aaron.

Ubel is now stepping up to the plate for the Aim Higher Foundation in Minnesota by donating all of the money raised from the auction for private school scholarships for Twin Cities families in financial need.

"Our schools are doing a great job and I have all of these cards, I hardly look at them," Ubel said. "And so, I called up a couple of people at Aim Higher Foundation and said, 'I’ve got an idea, hear me out.'"

"When listened to Fr. Ubel’s pitch and immediately we were all in to provide this creative way to give back to the community," Aim Higher Foundation vice president Ricky Austin said.

Ubel got the idea for this auction in late January. A parishioner told him that Catholic schools were "hitting it out of the park" in their handling of the COVID-19 pandemic. That interaction happened around the same time when Hank Aaron, Ubel’s favorite non-Twins player, passed away.

"All of a sudden, I decided to go back and look at some of the cards," Ubel said. "That’s when I began to put those two together."

It’s hard to believe, but these now cardboard treasures were actually headed for the trash one day in the early 2000s. With the exception of the Jackie Robinson rookie card, Ubel nearly tossed out the now valuable pieces of paper stock.

"When I was switching priestly assignments in about 2003 I literally had all of these cards in a Girl Scout cookie box where they had been stored," Ubel said. "I had them at the dumpster ready to throw them out, and at the last second decided not to."

When asked if divine intervention played a part in his decision to keep the keepsakes from the landfill, Ubel does not deny that.

"I think so, absolutely," Ubel said. "Especially now for sure."

His precious, personal pieces of the past are now helping the future.

"In the Lenten tradition, we have prayer, fasting and almsgiving," Ubel said. "Almsgiving has to be done with a sense of joy, and I can tell you that I’ve never been happier to give something away in my life."

If you are interested in the auction, you can find more information at https://aimhigherfoundation.org/.