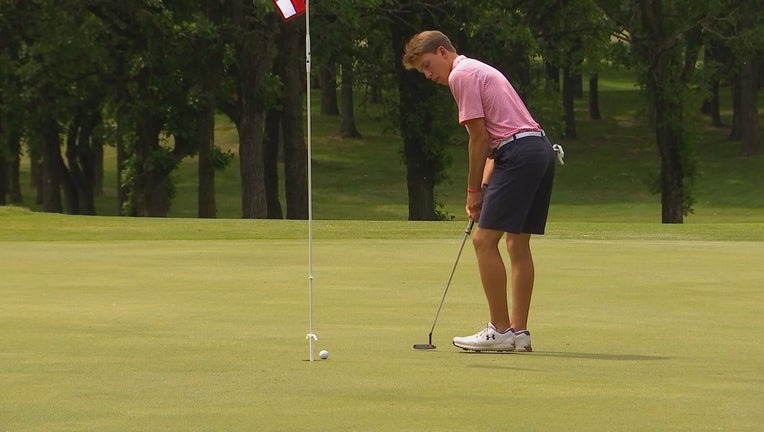 Minnesota PGA hosted a special Senior Showcase for high school senior golfers who had their seasons canceled due to the coronavirus. (FOX 9)

COON RAPIDS, Minn. (FOX 9) - From no proms to no graduation ceremonies, the class of 2020 will be remembered mostly for all that was missed in the midst of a pandemic.

It’s a list of cancelled events that includes the spring sports season for seniors in Minnesota. But before closing the door to high school, the opportunity for one more lasting memory emerged for golfers on Tuesday.

Before closing the door to high school, the opportunity for one more lasting memory emerged for golfers on Tuesday.&nbsp;

On the day the Minnesota State High School League state golf tournament was supposed to start, the PGA’s Minnesota chapter stepped up with an opportunity for high school seniors. The organization invited more than 100 players to Bunker Hills golf course for the first ever “Senior Showcase”. It gave seniors one more go in high school golf competition.

“We wanted to honor, and do something as the Minnesota PGA, especially to honor those seniors who had their whole season lost,” PGA Minnesota CEO J.D. Drimel said. “This was a great way to use some social distancing protocols, and actually have some type of golf event.”

Players from Minnetonka to as far as Moorhead teed up for one final time as high schoolers. Everyone abided by social distance practices, while limiting touchpoints on the course. Players kept scorecards digitally on their phones, while also using a hands-free technique of getting golf balls out of holes. While there were new concepts for a new event, being involved in competition once again brought about some sense of normalcy.

“It’s fun to get out there and get back in that competitive groove,” St. Thomas Academy senior Andrew Schreier said. “There are no gimmes, and there’s that intensity on those two foot (putts). It’s really cool.”

Everyone playing on the course shooting for the lowest score on a day that is one of the high points from the last three months.

“I graduated high school last week, and now I get one more time with my Minnetonka bag,” Minnetonka senior Gunnar Broin said. “I’m just going out to have fun and cherish every moment of it.”

This is a time that has taught this group of seniors how to keep rolling forward as they now swing into the future.

“Tough times come and go, you just have to get through them,” Moorhead senior Nathan Carlson said. “You have to work your way through it.”