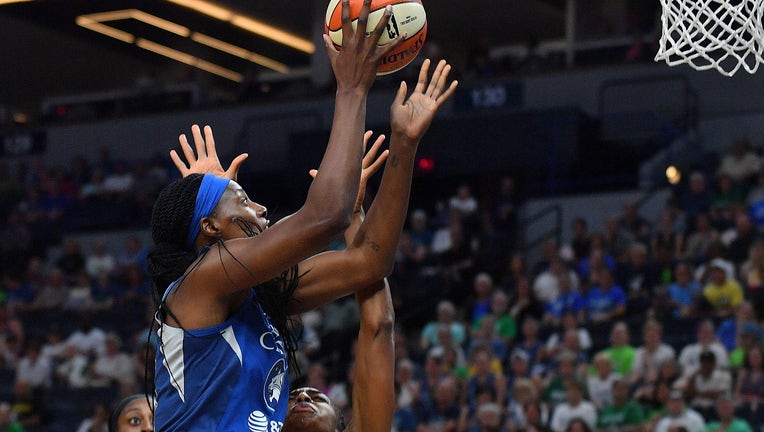 MINNEAPOLIS, MINNESOTA - JUNE 08: Sylvia Fowles #34 of the Minnesota Lynx shoots against Nneka Ogwumike #30 of the Los Angeles Sparks during their game at Target Center on June 08, 2019 in Minneapolis, Minnesota. (Photo by Sam Wasson/Getty Images) ((Getty Images))

MINNEAPOLIS - She would rather be celebrating with a win, but Minnesota Lynx center Sylvia Fowles entered the WNBA history books in Tuesday night’s 90-66 loss to the Seattle Storm at IMG Academy in Florida.

Fowles finished with 15 points and 11 rebounds, and in the process became the all-time leading rebounder in WNBA history. She set the record on her seventh rebound of the night, and now has 3,357 career rebounds in 12-plus WNBA seasons.

She broke the record of former teammate Rebekkah Brunson, who was watching from the bench as she’s now an assistant coach to Cheryl Reeve for the Lynx. Play was stopped when Fowles broke the record to acknowledge the accomplishment.

“Congratulations to Sylvia Fowles on becoming the new WNBA all-time leader in rebounds, passing five-time WNBA champion, former teammate and now Lynx assistant Coach Rebekkah Brunson.  Sylvia continues to exhibit an elite level of performance on the court in her 13th year in the league.  A revered teammate and presence in the league, she demonstrates to the younger generation that hard work, determination and selflessness are pillars of a successful career,” WNBA Commissioner Cathy Engelbert said in a statement.

Fowles helped lead the Lynx to WNBA titles in 2015 and 2017, and Reeve has seen her talents since Fowles came to Minnesota in a three-team trade in 2015. Fowles was the WNBA Finals MVP for both series. She’s also a six-time WNBA All-Star.

“I’ve had the great fortune of being able to share in Syl’s tremendous journey as a professional basketball player,” Reeve said in a statement. “To witness her ability to dominate on the glass night in and night out has truly been special. Syl’s incredibly kind and generous way is just as unmatched as her rebounding. Congratulations to Syl on becoming the WNBA’s all-time greatest rebounder.”

The Lynx are 1-1 as they face the Chicago Sky Thursday night.