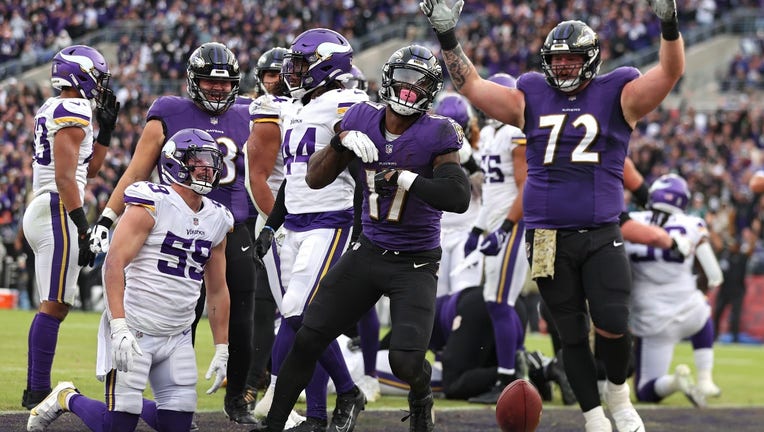 Le'Veon Bell #17 of the Baltimore Ravens reacts after scoring a fourth quarter rushing touchdown against the Minnesota Vikings at M&T Bank Stadium on November 07, 2021 in Baltimore, Maryland.  ((Photo by Scott Taetsch/Getty Images))

MINNEAPOLIS - The Minnesota Vikings are left frustrated and searching for answers after another double-digit lead slipped away in a 34-31 overtime loss to the Baltimore Ravens on Sunday.

The Vikings’ offense scored touchdowns on their first two possessions. The first came on a 50-yard throw from Kirk Cousins to Justin Jefferson, the second on a 1-yard plunge from Cousins, set up by a 66-yard run from Dalvin Cook. The offense didn’t see the end zone the rest of the game until Cousins hit Thielen for the game-tying touchdown with 1:03 left to force overtime.

The Vikings are 3-5 on the season, and seven of their eight games have come down to one possession.

"Personally it’s very frustrating, and it’s frustrating for the players. They fight their rear ends off like crazy, and it comes down to those situations," Vikings coach Mike Zimmer said Monday. "When you go out there and you win those games at the end, that changes the attitude, changes the complexion of the season and everything else. That part is frustrating, we fight like crazy and can’t get it done at the end."

Two sequences in particular leave the Vikings wondering what might have been. Cam Bynum intercepted Lamar Jackson in the second quarter, and returned it to the Baltimore 16. The Vikings then lost one yard on three plays, and settled for a Greg Joseph field goal.

The second came in overtime, after Anthony Barr intercepted Jackson. The Vikings’ offense, with a chance to win the game, then gained one yard on three plays and punted. It continues a disturbing trend for the offense, which has scored just three points off the last four defensive takeaways.

"Unacceptable. When the defense gives us that opportunity to get the ball on a short field, a sudden change, we’ve got to go execute and score points," receiver Adam Thielen said.

An offense filled with weapons managed 24 points, 13 first downs and 318 total yards while running 52 plays and having the ball for less than 24 minutes. They were also just 5-of-14 on third down.

The Vikings won the turnover margin, got a kick return for a touchdown and successfully executed a fake punt, and still lost.

"Everybody is trying to wrap their head around why? Why are we losing games? Why are we not having success on offense when we have so much opportunity? It’s kind of getting old to talk about that," Thielen said. "I know the fans are done with it, us coming in here every single week and saying we have the guys, we just have to go out and execute. I don’t really know what to say, it’s the same thing each week."

Rookie safety Cam Bynum got a phone call about 10 minutes after waking up Sunday morning. It was one of his coaches, letting him know he needed to be ready to play. The Vikings placed Harrison Smith on the reserve/COVID-19 list, and Bynum would make his first NFL start.

He finished with 12 tackles, and had his biggest moment in the second quarter. Lamar Jackson was looking for Mark Andrews down the seam, Bynum read the play and made a diving interception that he returned to the Baltimore 16.

Bynum said it was a play the defense had practiced during the week.

"I was just thanking God, it was the craziest feeling ever. It didn’t feel real, it still hasn’t hit me that I’m in the NFL. I don’t know if it ever will but at the end of the day, football is football. I went out there and I was expecting to make a play," Bynum said.

Bynum will likely start again this Sunday at the Chargers, with Smith in COVID-19 protocols.

The Vikings were without starters Smith and Garrett Bradbury on Sunday due to COVID-19 protocols. Bradbury is vaccinated, but couldn’t get tested twice in a 24-hour span to be cleared to play at Baltimore. He could return this week with negative tests. Smith, who has been following protocols for non-vaccinated players, has already been ruled out this week.

Zimmer said he didn’t know specific details, but Smith traveled back to the Twin Cities separately from the team Sunday.