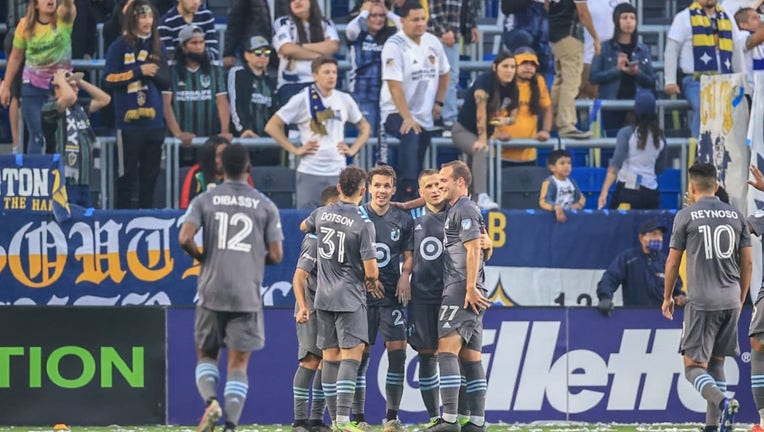 MINNEAPOLIS - Minnesota United certainly didn’t make Decision Day easy on themselves, but the Loons are headed back to the Major League Soccer Playoffs after playing to a 3-3 draw with L.A. Galaxy on Sunday.

The Loons finished fifth in the Western Conference with 49 points after finishing the regular season 13-11-10. They earned their third straight trip to the MLS Playoffs, and will hit the road to face the No. 4-seeded Portland Timbers. The Loons needed a draw or a win to clinch a playoff spot.

"Relieved. So pleased for the players and staff, and everybody back in Minnesota. It’s been a really stressful day as you can see, but we came through it," Loons’ coach Adrian Heath said after the game. "You know huge, huge praise for the players because to come in here, when they know they need a result, is no small feat. So just delighted for everybody connected at the club."

Minnesota United got out to a 2-0 lead on goals from Adrien Hunou in the 22nd minute and Robin Lod in the 34th minute. The Loons led 2-1 at the half, and the Galaxy tied it 2-2 in the 51st minute. The Loons got the benefit of a Galaxy own goal in the 62nd minute to take a 3-2 lead. The Galaxy scored in the 75th minute to tie the game 3-3.

In a game that had back-and-forth action for both teams, keeper Tyler Miller made seven saves for Minnesota United. After an 0-4 start to the season, the Loons are yet again a playoff team.

"It’s a huge thing. It’s been a rollercoaster of a season. We started really bad then we had really good games in the middle of the summer and then these last few games we have been struggling a little bit, but we have been getting the points that we needed for the playoffs and now we can just reset ourselves and focus on the playoffs," Lod said.

Last year, Minnesota United earned its first top-four finish in the West and in the process, won its first home playoff game in franchise history. The Loons got all the way to the Western Conference finals and had a 2-0 lead on Seattle Sounders FC before Seattle mounted a furious rally in a 3-2 victory.

Minnesota United and the Portland Timbers have met twice this season, each time wins for the Loons.