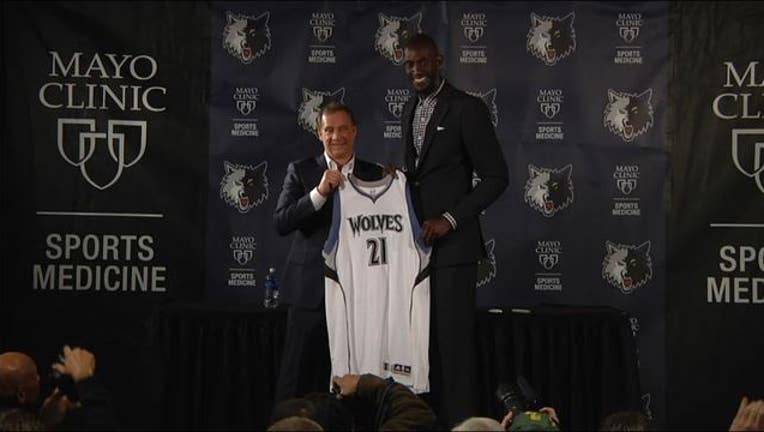 The Minnesota Timberwolves are ready to officially introduce Kevin Garnett to the public at a 3 p.m. press conference Tuesday -- just a day before he plays his first game with the Wolves on Wednesday.

"I figured if LeBron can go home, then, sh---, why can't I?" Garnett said as he re-introduced himself to the crowd.

"If I was going to waive my no trade situation, it would be just for this," Garnett said.

He made clear he knows these are his declining days as an athlete -- he is 38 years old, after all -- but he sees a lot of potential on the Wolves' young roster.

"This is about the most talent on this team since it has been assembled," he said.

"Seeing the talent on here, it's refreshing."

Garnett said he was a bit discombobulated on the roads and noted how much Minneapolis has changed, or as he heads west toward that home he kept, "believe it or not." Most of all, he's happy to be back with a warm welcome from his supporters.

"The fans and the people have always been great to me, they've been great to my family," he said. (He's also aware Torii Hunter is returning to the Twins and said he'd give him a call.)

Garnett knows how to hold a press conference. He offered several media members a warm hello and there was no shortage of laughter as he graciously answered questions. He added he has gained a lot of patience as he raises his young daughters and said he applies that knowledge to working with his teammates. Has he garnered enough patience to coach? "Hell, nah."

"A coach, hell, no. A coach is what I won't be, you can't talk me into that," Garnett laughed.

An additional 1,000 seats were made available to the public for Garnett's homecoming Wednesday. The remaining tickets are available to purchase at www.timberwolves.com/wolvestix.

"Due to the large anticipated turnout for Wednesday's game, fans are encouraged to arrive early at Target Center," the Timberwolves said in a press release. "Doors for season members open at 5:30 p.m. and general public doors open at 6 p.m."