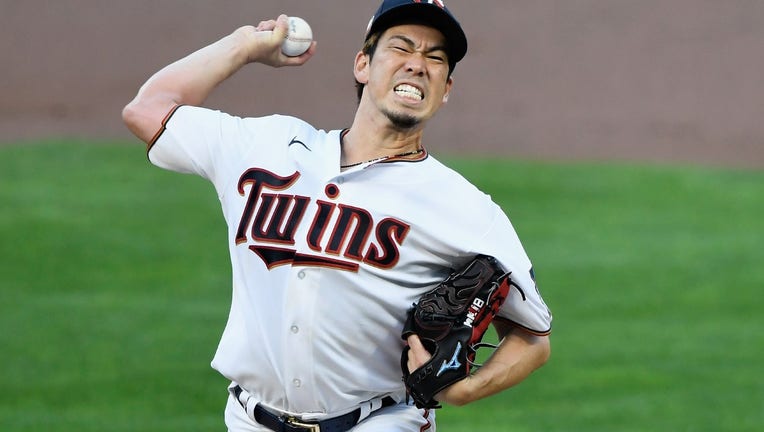 Kenta Maeda #18 of the Minnesota Twins delivers a pitch against the Milwaukee Brewers during the second inning of the game at Target Field on August 18, 2020 in Minneapolis, Minnesota. ((Photo by Hannah Foslien/Getty Images))

MINNEAPOLIS - Kenta Maeda is hoping one of the best seasons of his big league career is just the start of things to come, and it would be welcome news for the Minnesota Twins.

His journey to Minnesota in 2020 was a bit of a whirlwind, with trade complications involving hard-throwing reliever Brusdar Graterol. But Maeda eventually came to the Twins, and pitching out of the No. 2 spot in the starting rotation behind Jose Berrios, became the team’s most consistent pitcher in a 60-game season shortened by the COVID-19 pandemic.

Maeda finished 6-1 in 11 starts and had a 2.70 earned run average. He struck out 80 and walked just 10 in 66 2/3 innings. He also allowed just nine home runs. Maybe his most impressive stat in 2020? Finishing second behind Shane Bieber for the American League Cy Young Award. He finished ahead of Hyun Jin Ryu, Gerrit Cole and Dallas Keuchel among others.

"It was really great. To be a finalist for the Cy Young, a contender is an honor. That’s something that I never imagined. It feels really great to be honored and finish second," Maeda told reporters on Thursday.

Maeda will be among the Twins’ pitchers and catchers having their first workout on Friday at the CenturyLink Sports Complex in Fort Myers, Fla. But he’s already been working out, and throwing, to get ready for Spring Training.

Maeda threw 22 pitches on Thursday in the Florida sun.

"It was the first bullpen of Spring Training, so I went nice and easy just to make sure where my body is at. Everything felt great, so going into Spring Training, I’ll be wearing a uniform and get myself ready for a more intense bullpen going forward," Maeda said.

He'll be a key piece in the starting rotation that features Berrios, Michael Pineda, J.A. Happ and either Matt Shoemaker or Randy Dobnak.

We don’t yet know how long the 2021 Major League Baseball season will be, but it’s a safe bet that it’ll be longer than 60 games. Maeda says he didn’t change his offseason approach. He doesn’t throw a lot in the downtime, he prefers to focus on building strength by weight training.

He’ll try to treat it like any other normal season. Players and fans would welcome any sense of normalcy.

"I’ve just got to start practicing and start preparing and see what it’s like. I’ll just go in as a normal season in that sense, a normal approach as any other," Maeda said.

Maeda has found a comfort zone with the Twins, and has earned the trust of his coaches and teammates by his ability to shut opposing teams down. He was two outs away from a no-hitter last season, and was the most consistent pitcher in the condensed year.

The next step is leading the Twins to another division title, and making a playoff run as he embarks on his sixth MLB season and second in Minnesota.

"The goal remains the same, to become a World Series champion. I hope to contribute to the team," Maeda said.