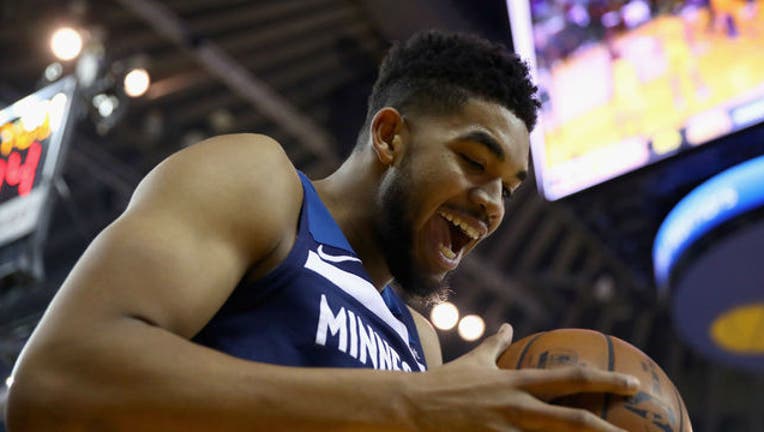 Karl-Anthony Towns #32 of the Minnesota Timberwolves reacts during their game against the Golden State Warriors at ORACLE Arena on January 25, 2018 in Oakland, California. (Photo by Ezra Shaw/Getty Images)

MINNEAPOLIS (KMSP) - Karl-Anthony Towns was on fire Wednesday night, scoring a career-high 56 points and setting a new Minnesota Timberwolves franchise record in a must-win game over the Atlanta Hawks.

The Wolves defeated the Hawks 126-114, and are currently the seventh seed in the West, a half game ahead of the Utah Jazz. Minnesota is looking to make the playoffs for the first time since 2004.

The 22-year-old center surpassed the previous record of 52 points set by Mo Williams in 2015.

Towns posted 26 points in the first half alone and he just kept going. He also finished the game with 15 rebounds and four assists. To put his 56 points in perspective, the rest of the Timberwolves starters combined for 49 points.

The Timberwolves are 5-5 in their last 10 games. They play the Dallas Mavericks in Dallas on Friday.