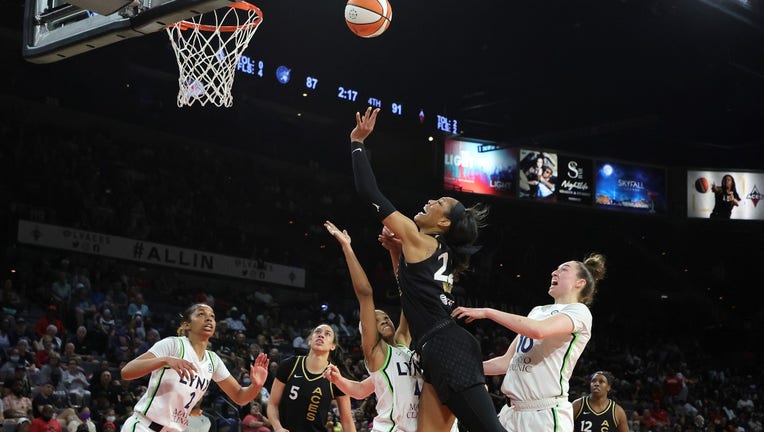 A'ja Wilson #22 of the Las Vegas Aces scores against Moriah Jefferson #4 and Jessica Shepard #10 of the Minnesota Lynx during their game at Michelob ULTRA Arena on June 19, 2022 in Las Vegas, Nevada. The Aces defeated the Lynx 96-95. ((Photo by Ethan Miller/Getty Images))

MINNEAPOLIS - Jessica Shepard took full blame after the Minnesota Lynx lost at the Las Vegas Aces 96-95 on Sunday, falling to 3-13 on the season as any hopes for the WNBA Playoffs slip away.

Shepard scored 22 points and grabbed 19 rebounds, and the Lynx had a season-high 95 points along with 11 made 3-pointers. Trailing 96-93 in the closing seconds, Shepard scored a two-pointer when the Lynx were down three.

"That was definitely my fault. In the timeout, coach had drawn up a play and obviously, time and score. That’s on me at the end of the day. Obviously I didn’t realize it was a three-point game," Shepard told reporters after the loss.

Lynx coach and general manager Cheryl Reeve had her hands on her head as she watched Shepard score inside the three-point line, needing three points to send a game against the top team in the WNBA to overtime.

"Jess feels real bad about that. Jess played a hell of a game, we’re not in a situation to have a shot at it if not for Jess’s 22 and 18 rebounds. Just unfortunate there at the end," Reeve said. "I don’t think the game boils down to that. It boils down to how flat we came out in the third quarter."

Moriah Jefferson added a team-high 23 points and seven assists for the Lynx, who had a 50-39 lead on the Aces at the half. But Las Vegas out-scored Minnesota 34-24 in the third quarter, allowing for the tight finish.

The Lynx have had other players step up recently with Sylvia Fowles out nursing a knee injury, and Napheesa Collier out most of the season after having her first child. The Lynx have now lost five straight and seven of their last eight, and are last place in the WNBA at 3-13.

"I don’t know what else to say other than it was obviously a good game for people to watch. We were happy with our resilience overall. We’re a team that wants to win, so it’s kind of hard to just say it was a really good game because the outcome for them, the want a W," Reeve said.

It hasn’t been the season the team had in mind, with Fowles announcing before the season that this would be her final run in the WNBA. A franchise with four WNBA titles and perennial playoff expectations will likely not be part of the postseason.

"I think we know the team we’re capable of being, you see stints of it. I think we’re all frustrated, we all want to put the full 40 minutes together. We can’t come out in the third quarter and get beat the way we did. We know it takes 40 minutes to win a basketball game in the WNBA," Shepard said.