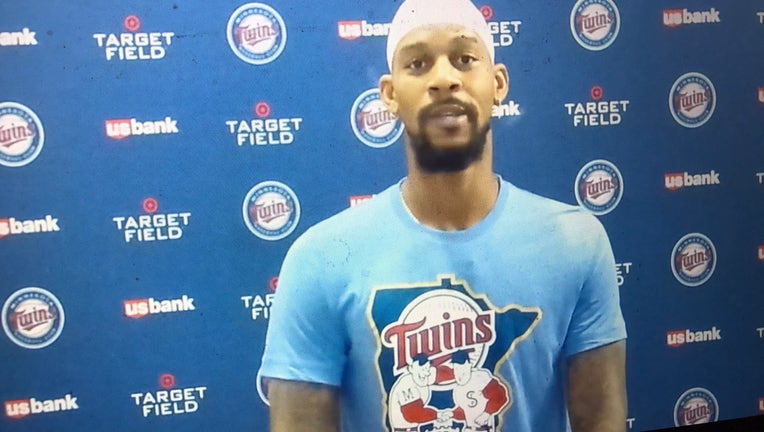 Byron Buxton talked Wednesday about becoming a father for the second time and returning to the Twins with a fully-healed shoulder after surgery late last season.

The Minnesota Twins’ center fielder was away from the team when camp started, with his wife due any day with their second child. Blaze Buxton arrived to the world late last week, and Byron was on his way to Minneapolis.

It’s likely been a whirlwind three-plus months for Buxton, preparing for being a father again while dealing with the uncertainty of a baseball season during the Covid-19 pandemic. He left Spring Training and was able to get his work in at home. Now he’s with another family in the Twins, and likely won’t see his actual family for some time.

“It’s been pretty weird. Obviously having a newborn and me leaving, not the ideal situation but it is what it is. I just got here so I’m still warming up to things a little bit. It’s kind of awkward but just have to adjust to it,” Buxton told reporters via Zoom on Wednesday.

Perhaps the biggest blessing in disguise for Buxton was Covid-19 and tense discussions between Major League Baseball and its players’ union delaying the start of the season. Buxton missed the last month of last season, and the playoffs, after having shoulder surgery. He got injured chasing down a fly ball in Miami.

He was on track to be ready for an Opening Day in late March, but delaying the season until July gave him even more time to heal. He posted videos on social media during quarantine taking swings outside. He says his shoulder is 100 percent.

“It gave me that time to fully get healed and get to where I wanted to and I’ve got not limits, so I’m back to being myself and going out there and playing the game the right way,” Buxton said.

When Buxton was healthy last year, he was one of the most dangerous players for the Twins. He hit .262 with 30 doubles, four triples, hit 10 homers and had 46 RBI in 87 games. He stole 14 bases and put pressure on opposing pitchers when on the bases, but might have made the greatest impact on defense.

His ability to run down fly balls in gaps and limit extra bases put less stress on his outfield teammates, Max Kepler and Eddie Rosario.

“Playing outfield is definitely always a lot different without him beside, he impacts the game in every aspect I think. His defense is like no other, the best I’ve ever seen, so I’m definitely super excited to have him back on the field,” Kepler said.

Buxton has made a few adjustments in the off-season. He’s learning to leap more off two feet to make catches at the wall, learning when to be aggressive on a defensive play and when to play one off the wall. He doesn’t like to let baseballs hit the ground, but Buxton is more valued in center field than on the injured list.

Now for Buxton and the rest of the team, baseball is about far more than just the game. They show up to Target Field daily having to follow strict Covid-19 guidelines, wear masks, get temperatures taken and do their best to prepare for a 60-game season while maintaining social distancing.

They’ve also got an American League Central Division title to defend, and with games meaning a lot more, they can’t afford a slow start when things get real in Chicago on July 24.

“Obviously with a short season, everybody is going to come out of the gates hot and be ready to go. Just getting out there and knowing out of the gate, every game matters and you can’t let things slip, that’s what makes the competition fun about it,” Buxton said.

The team started to form a chemistry early in Spring Training, and the three-month layoff hasn’t changed much with the Twins. It took a few days for everybody to get acclimated, but Buxton said they’re talking, communicating and sharing laughs outside and at a distance.

It also helps when you’re coming off a 101-win season and have high expectations, regardless of the new circumstances.

“When you’ve got that type of chemistry with each other and especially with the team, you do great things,” Buxton said.