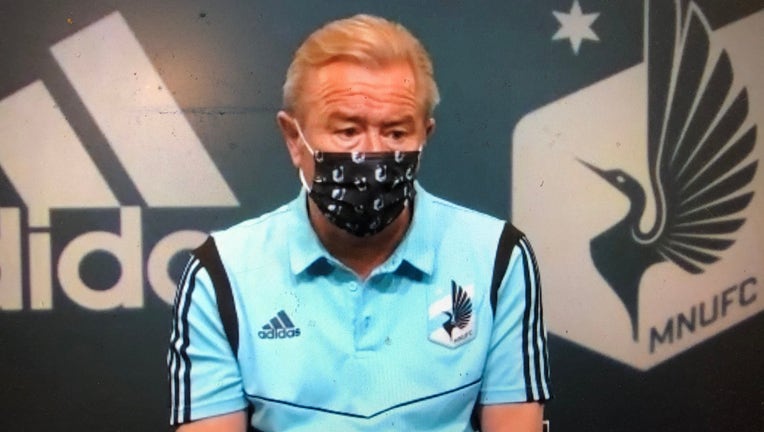 MINNEAPOLIS - After five weeks in the Major League Soccer bubble in Florida, Minnesota United finds itself one win away from a chance at history for the second straight season.

The Loons, heavy underdogs for the second time in the knockout round of the MLS is Back Tournament, beat the San Jose Earthquakes 4-1 last Saturday night for the second time this season on goals from Robin Lod, Jacori Hayes, Luis Amarilla and Marlon Hairston. Minnesota United advanced to the tournament semifinals, and they’re now two wins away from a prize pool of more than $1 million, and a spot in the CONCACAF Champions League in 2021.

Last year, the Loons got to the finals of the Open Cub in August before losing to Atlanta United 2-1.

This year, Minnesota United is more than happy to be quarantined at ESPN’s Wide World of Sports in Orlando for two months if it means flying home with hardware, money and league-wide recognition.

“It’s incredible, I’m so proud of my teammates, my coaches. All the hard work that we put into prepare for this tournament, it’s awesome to see it pay off,” Loons’ defender Chase Gasper said. “It’s a fun time when your team is winning. Everyone is happy, it’s great to see all the guy’s faces every day, so we’re just excited and looking forward to our next game.”

That next game is more than just a game for coach Adrian Heath. Minnesota United faces Orlando City Thursday night for a spot in the MLS is Back Tournament final. Heath was the manager in 2010 when the team moved to Orlando, and helped lead them to becoming an MLS expansion franchise in 2015.

Heath led the franchise to two regular season titles and a league title in its first two years, and was named the USL Coach of the Year two straight seasons. He signed an extension in November 2014, then was fired after a 4-0 loss to FC Dallas in in July of 2016. Heath took over Minnesota United in November 2016, before its first MLS season.

Heath doesn’t look at playing his former team as revenge. Rather, it’s an opportunity for the Loons to get closer to history.

“Orlando City will never be just another team for me. I spent too many years working too many hours to make the club what it was and what it became. Most of it started here at Disney, so I’ve got great memories from this place,” Heath told reporters Monday on Zoom. “It’s going to be a difficult one for us, we both realize we’re one game away from what could be a historic moment for both clubs.”

The Loons have steady gotten better since the MLS is Back Tournament started, scoring four goals in Group D and finishing second with a 1-0-2 record. They knocked off previously unbeaten Columbus Crew in penalty kicks to advance out of the knockout round of 16, then beat San Jose 4-1.

Orlando City won Group A with a  2-0-1 record, scoring six goals over group stage play. They then beat Montreal in the round of 16, and knocked off one of the favorites, L.A. FC, in penalty kicks to get to the semifinals.

Gasper said losing the Open Cup final was one of the lowest points of last season, and it’s a motivating factor to stay in the Florida bubble.

“We still have a long way to go, we’re just focused on Orlando right now. But it would mean the world to our club to get that first piece of hardware and be a part of that club’s history would be an incredible feeling,” Gasper said.

Gasper said the Loons, despite being underdogs most of the tournament, were confident going into Florida after a 2-0 start to the season before the Covid-19 pandemic halted play. He told ESPN post game after beating Columbus in penalty kicks, “Don’t count the Loons out.”

“I think that started before the tournament even began, before we played our first game. We started the season off so well the first two games and I think that’s where we really showed ourselves, how much potential this group has,” Gasper said. “When we did reconvene, everybody had that confidence that we can come in and win this thing from the start.”

A win over Orlando Thursday, and Minnesota United plays for a piece of history on Aug. 11.

“We know this is going to be tough, I think this will be our toughest game so far and we’re going to have to play probably better than we’ve done at any stage in the tournament to win the game,” Heath said. “There’s a lot at stake and we’re looking forward to it. I think we have an unbelievable opportunity.”