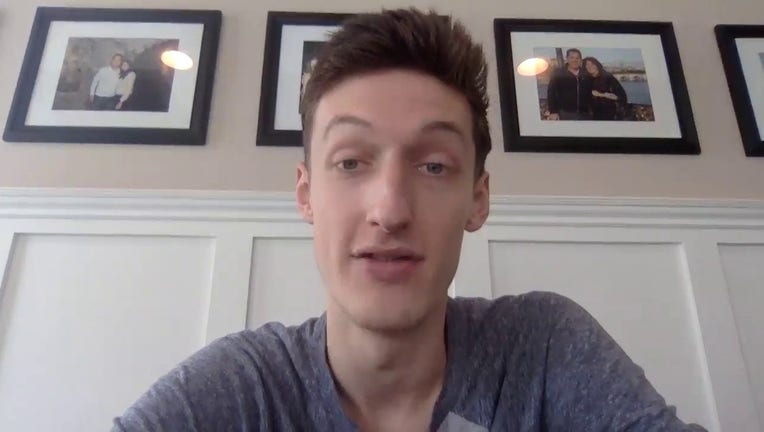 MINNEAPOLIS - University of Minnesota basketball coach Richard Pitino has taken full advantage of the spring recruiting season to add talent, and his latest addition filled the last remaining scholarship for the 2020 season.

Rice transfer Drew Peterson, a 6-8, 190-pound forward, announced his commitment to the Gophers. He averaged 11.1 points, 6.5 rebounds and 3.5 assists per game last season for the Owls. Peterson said from the moment he entered the transfer portal, Pitino and the Gophers were among the first to reach out and have been in contact pretty much daily with him.

Peterson will join the Gophers in 2020 after transferring from Rice.

“He was pumped, he said I made his day. He’s ready to roll because I think I’m the last spot that’s available right now,” Peterson said Tuesday via Zoom. “I think we really can get together a really good team going into next year.”

The news came just hours after Hopkins basketball star Kerwin Walton, who had the Gophers among his finalists, gave his verbal commitment to North Carolina. Peterson said after talking with his parents at their Illinois home, his gut told him Minnesota was the right fit for him.

Peterson, who started 31 games last season and was the third-leading scorer at Rice, describes himself as a lanky 6-8 "do it all" guard/forward combo whose game has been compared to former Gophers star Amir Coffey. Peterson can score at all three levels, shooting 41 percent from the field last season and just under 33 percent from the perimeter. He thrives off driving and being a facilitator. He had 112 assists last season for Rice.

He’s back at home in Illinois due to the Coronavirus pandemic, but lifts with a strength trainer three times per week and has started a nutrition program to put on weight before next season. He also drives 45 minutes to a private gym to get shots up.

Without being able to see the University of Minnesota campus, he did a virtual tour with the coaching staff. It included Zoom meetings, a PowerPoint presentation, a look at the campus and facilities and film of how he would be used at Minnesota.

“I honestly think it was a really efficient process and I think that it’s a process that can be set up for the future too,” Peterson said.

He’s one of three transfers to join the Gophers this spring. Western Michigan grad transfer Brandon Johnson, a 6-8, 220-pound wing who averaged 15.4 points and eight rebounds in 31 minutes per game last season, will play at Minnesota next season. The third is Drake center Liam Robbins, a 7-footer whose uncle is Gophers associated head coach Ed Conroy.

Robbins averaged 14 points and seven rebounds per game at Drake last year, and was one of the most coveted transfer big men on the market. The Gophers are hoping he’ll replace Daniel Oturu, who declared for the NBA Draft.

Being a grad transfer, Johnson is immediately eligible. Robbins and Peterson are awaiting the NCAA’s decision on May 20 that would allow college athletes a one-time transfer without penalty. If that fails, they’ll both apply for waivers for immediate eligibility.

“In talking with coach Pitino, they want me to play right away. If I can get a waiver, or that passes, the one-time transfer rule, I’m ready to go,” Peterson said.

Those three will join a program that will include incoming freshman Jamal Mashburn Jr. and Martice Mitchell. The Gophers are also expecting point guard Marcus Carr to return next season. He declared for the NBA Draft, but left the option open to return to Minnesota. He was a Third Team All-Big Ten pick and was Minnesota’s second-leading scorer last season behind Oturu.

The Gophers finished 8-12 in the Big Ten last season and have only finished above .500 in the league once in Pitino’s seven seasons. Peterson feels that will change next year, if he and Robbins are eligible.

“I’m ready to impact the team and go make some noise in the conference. I really think we can do that with the roster we got, with the guys we’ve got coming in too,” Peterson said. “I’m ready to go.”