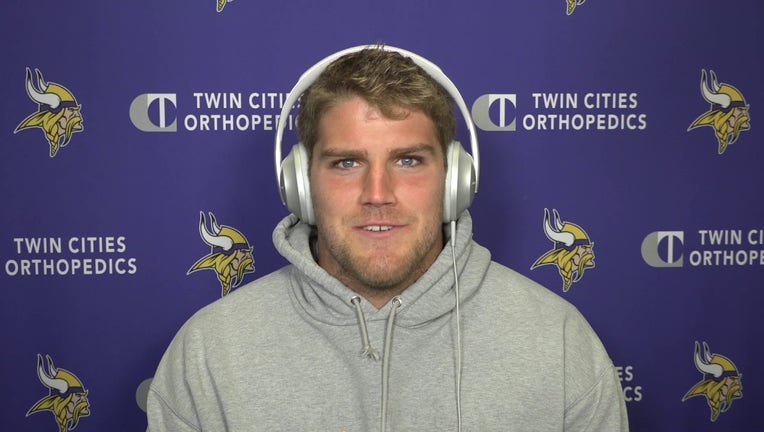 Brian O'Neill talked expectations for the Minnesota Vikings in 2021 at OTAs on Wednesday at TCO Performance Center.

Through those two weeks of workouts, the Vikings have had near 95 percent of players in attendance. Aside from Christian Darrisaw sitting out Wednesday with a groin injury, the Vikings have had perfect attendance from the offensive line. If there’s one group where you want chemistry on a football team, it’s the unit that keeps Kirk Cousins off the ground, and opens up running lanes for Dalvin Cook.

The latest from Vikings OTAs Wednesday

The Vikings were back at it in Eagan Wednesday as OTAs continue.

Brian O’Neill is now the veteran in the room, with Riley Reiff departed in the offseason. He likes what he sees so far.

A second round pick by the Vikings in 2018, O’Neill is now in a contract year and hoping for an extension either by the time training camp comes or before the regular season starts.

He’s largely staying out of contract talks, at least for now.

A lot can and will happen between now and September, but the Vikings used two early draft picks on Darrisaw, and Ohio State offensive lineman Wyatt Davis. The very real chance exists that the Week 1 starting offensive line at Cincinnati features Garrett Bradbury, Ezra Cleveland, O’Neill, Darrisaw and third round pick Wyatt Davis.

Cleveland, who played in 13 games and got nine starts in his rookie year, hit the weight room to get stronger for his second NFL season. He also dove into the playbook, which has his confidence soaring for 2021.

"Just getting out there, I know what I’m doing and I can just play football, not have to worry about situations so it’s helped me a lot," Cleveland said.

Kirk Cousins is coming off throwing a career-high 35 touchdowns. Cook was second in the NFL in rushing, but the Vikings finished 7-9 and missed the NFC Playoffs. O’Neill said the talk around TCO Performance Center throughout OTAs has been that has to change.

"I want to be back in the playoffs, and I want to make a run at this thing. I think that’s been stated pretty clearly around here, that’s the expectation and that’s the goal," O’Neill said.

IRV SMITH JR. READY TO BE NO. 1 TIGHT END

The Vikings decided to take the tight end position in a different direction, releasing Kyle Rudolph after the 2020 season after 10 years with the club. Rudolph signed with the Giants, and now Irv Smith Jr. is the leader of the tight end room.

The 2019 second round pick out of Alabama played in 13 games last season, starting seven. He finished 2020 with 30 catches, averaging 12.2 yards per catch and had five touchdowns. He’ll certainly have a bigger role in 2021.

"Definitely I feel like my role is obviously going to increase, which I wanted. I just want to help this team make plays in any way possible," Smith said.

He’ll get help from Tyler Conklin, who made 19 catches for 194 yards and scored his first NFL touchdown in 2020. But make no mistake about it, Smith will be the featured tight end Week 1.

"Knowing I’m going to be the starter, knowing what to expect. Obviously the workload is going to be increased. For me, I just take every road for what it is and try to make the most out of every opportunity," Smith said.

The Vikings wrap up organized team activities next week before hosting mandatory minicamp in mid-June.