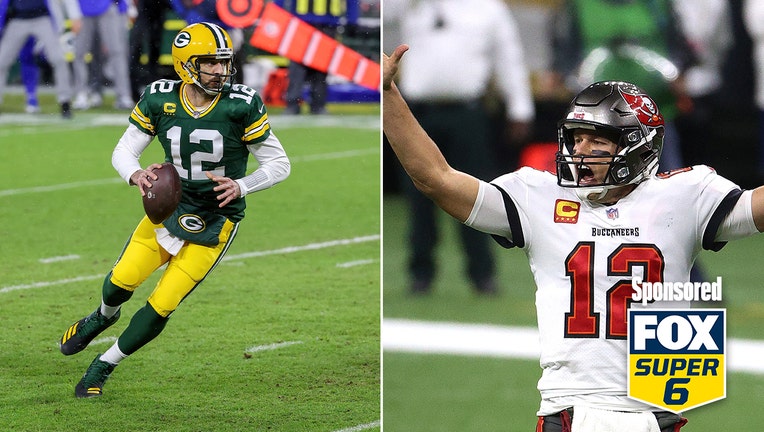 LEFT: Aaron Rodgers #12 of the Green Bay Packers drops back to pass in the second quarter against the Los Angeles Rams during the NFC Divisional Playoff game at Lambeau Field on January 16, 2021 in Green Bay, Wisconsin. (Photo by Dylan Buell/Getty Im

Every championship game in the National Football League is filled with drama and intrigue, subplots and heroes that dominate the stage.

When you add the likely NFL Most Valuable Player in Aaron Rodgers, the greatest quarterback of all-time in Tom Brady and Lambeau Field in January together as the main headliners with a trip to the Super Bowl on the line in the NFC Championship game, that’s great theatre.

Predict the right answers to the six questions on this game and you could win $500,000 and a new Ford F-150. It’s that simple! Just download the free app to play and answer the following six questions correctly:

Both of these teams have dynamic passing games but have become more reliant on the running game than they have been in the regular season. In Sunday’s 30-20 win over the New Orleans Saints, Brady overcame a slow start to complete 18 of 33 passes. Rodgers completed 23 of 36 passes against the Rams top-ranked defense during a 32-18 win on Saturday. In the earlier meeting back in Tampa on Oct. 18 that was won by the Bucs 38-10, the two combined for 33 completions in what was Rodgers' worst game of the season.

If you are using October as an example, it was Brady and the Bucs who won in this category by one (17 to 16). Again, that’s something that was an abnormality because Rodgers threw two interceptions in a game that got away from Green Bay in a hurry with Tampa scoring 38 straight points and 28 in the second quarter. Counting playoff games this season, Rodgers has completely 395 passes – an average of 23.2 over 17 games. Brady has completed 441 passes – an average of 24.5 over 18 games.

One of the biggest surprises for Tampa Bay on Sunday was the advantage that the Bucs enjoyed over the Saints in rushing yards, who had Alvin Kamara in their backfield, by a 127-104 margin. Part of that is the re-emergence of Leonard Fournette, who stepped into Ronald Jones' lead back role and looks like the old power back from his days in Jacksonville with a 4.3 yards per carry average in two playoff games. Still, Aaron Jones rushed for 99 yards in the win over the Rams and the Packers pounded 188 total rushing yards on the ground. The Bucs defense was the best against the run this year, allowing only 1,289 yards and 3.6 yards per carry. The Packers run defense was not good- 24th at 4.5 yards per carry during the regular season.

This is the toughest question of them all because both sides have a bevy of weapons and some numbers that work in their favor. During the regular season, the Buccaneers had the fourth-most passing yards at 4,776 yards. When you look at Chris Godwin, Mike Evans, Antonio Brown, Rob Gronkowski and even Scotty Miller, there are a bevy of weapons for Brady to look for. However, the Packers tied for the lead in 40+ yard receptions with 14 of them. DeVante Adams is good not just at receptions – 115 of them- but is great at yards after the catch as well.

The first thing to look at on this one could be the weather. Early indications this week for Sunday in Green Bay have temperatures in the mid-20s with light snow possible. The longest field goal at Lambeau this season was 52- done twice by opponents. Mason Crosby’s longest this year at Lambeau was 48 yards early in the season. Ryan Succop is Tampa’s kicker and his longest this season is 50. In other words, it won’t be long.

Going against Brady in a championship game is a very risky proposition. This is his 14th conference championship game and he’s won 10 of them – including going 3-4 on the road in the title game. (Two wins in Pittsburgh in 2001 and 2004 and one in Kansas City in 2018.) There’s also this quirky stat: every team that has beat the Packers in the playoffs since 2012 has a regular season win against them in the same year – the 49ers in 2012, 2013 and 2019; the Seahawks in 2014, the Cardinals in 2015 and the Falcons in 2016.  And yet, there’s the fact that Rodgers and the Packers have been the best team in the NFC all year and they are playing at such a high level offensively makes this a monumental challenge for Tampa Bay. Throw in the weather for a 43-year-old quarterback playing a third straight road game and the pick here is the Packers heading to Tampa for the Super Bowl.