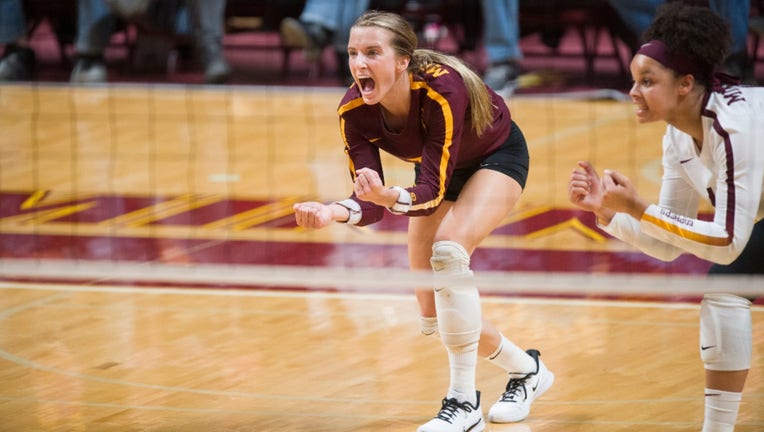 MINNEAPOLIS - The University of Minnesota volleyball team has been through just about everything in the last 18 months.

The Gophers dealt with injuries to key players, COVID-19 issues and having to create their own energy on the court, playing in an otherwise empty Maturi Pavilion. A team that makes a habit out of getting to the NCAA Final Four had its 2020-21 season end back in April in a loss to Pittsburgh in the second round of the NCAA Tournament.

The Gophers finished 16-3 last season, were 8-1 on their home court without fans and had five matches called off due to COVID-19.

Hugh McCutcheon and his squad, which started workouts for the 2021 season this week, have a new found motivation nearly four months removed from that loss. They just watched the U.S. Women’s National Team win a gold medal in Tokyo. McCutcheon coached the men’s team to a gold in 2008. In 2012, he led the U.S. women to a silver medal.

"I think it continues to validate the increasing strength of our sport in this country. These kind of performances happen once every four years. At least in our sport, they’re the biggest dream that’s out there, the chance to win an Olympic gold," McCutcheon said. "Now for that to be a reality on the women’s side as well as the men’s side I think can only help."

The Gophers held their first practice of the season on Monday, a sense of normalcy after 2020 was anything but. The team was happy to see All-American Stephanie Samedy, after she announced back in June she was coming back for one last run with the Gophers.

Samedy is hoping to use the inspiration provided by the Olympics to chase a national title.

"It kind of sparked a fire within us. They made history, why not us? Why can’t we make history for Minnesota and win a championship? It’s inspiring to see all these players to be able to do something so great and significant," Samedy said.

The road there will be anything but easy. That’s not McCutcheon’s style. The Gophers will have one of the toughest non-conference schedules in the country this year, facing four top-15 programs in their first six matches.

That group includes Baylor, Texas, Florida and Oregon. The No. 9-ranked Gophers will reopen Maturi Pavilion to fans on Sept. 2, and it should be a full house against the No. 2-ranked Longhorns.

"I’d say playing in front of your hometown and playing in front of thousands of Minnesota fans is one of the coolest experiences I’ve ever had. You can’t really describe it," senior libero CC McGraw said. "Especially being a senior, I want that again so bad."

McGraw is back after dealing with injuries throughout the 2020-21 season. She played in just 11 matches, missing the last seven and the NCAA Tournament. The Prior Lake native also made it official that she’s started graduate school and will be back for her last year in 2022.

Like he does every year, McCutcheon is embracing the tough early schedule. He wants his players to as well. After all, Minnesota is one of six Big Ten teams entering the season ranked in the top 12. That group includes Wisconsin (3), Nebraska (6), Purdue (7), Ohio State (10) and Penn State (12).

"If we get beat up, we get beat up. The goal isn’t to win the preseason, the goal is to try to be winning the conference and try to be the last team standing. I felt OK about mixing it up," McCutcheon said.

The current goal simple: Show up to the gym, have fun, compete every day and get better.

The long-term goal is also clear: COVID-19 restrictions or not, fans or not, give yourself a chance at the Big Ten title and see what happens in the NCAA Tournament.

"We’re here to win, we’re here to compete and we all want to win a national championship. Whatever is going on outside these walls, outside The Pav, doesn’t matter. It’s irrelevant," McGraw said. "Whatever protocols are put in place or not put in place, we want to make sure we’re showing up for our team and giving everything we’ve got on that day for the team. The rest is irrelevant."