MINNEAPOLIS - The University of Minnesota football team opens the 2021 season Thursday night, under the bright lights on the national stage against No. 4-ranked Ohio State at Huntington Bank Stadium.

Unlike most years when the Gophers host a hyphenated or directional program to start this season, this year it’s a Big Ten game against a team that has the annual expectation to not only get to the College Football Playoff, but contend for a national title. Last year, the Buckeyes won the Big Ten and got to the national title game before losing to Alabama. 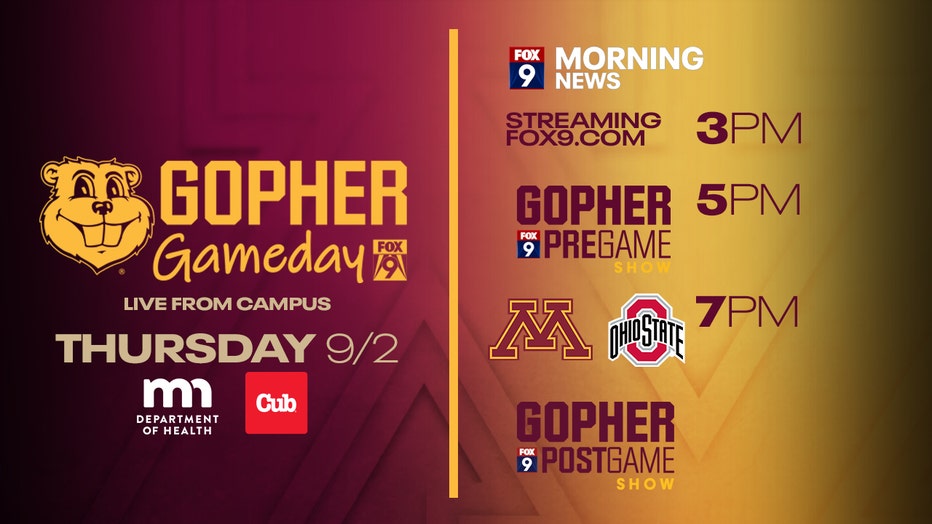 The Gophers get the Buckeyes Thursday night in a game you can watch on FOX 9. Pregame coverage starts at 3 p.m. on fox9.com/live and on air at 5 p.m.

They’re 14-point underdogs, so what will it take to pull off the upset? Here are five keys to what would be a monumental victory for PJ Fleck.

For the first time since late November 2019, it should be a full house at Huntington Bank Stadium Thursday night. Fans can return for live events for the first time since before the COVID-19 pandemic. The Gophers will run out of the tunnel to their first full stadium since playing Wisconsin for Paul Bunyan’s Axe in 2019. All the pressure is on the Buckeyes, who carry the annual expectation of going undefeated and getting to the College Football Playoff.

The Gophers have nothing to lose, so they need to go out and play like it and keep the crowd engaged the entire game. If you lose, you were expected to and you can still contend for the Big Ten West. Get a win, shock the college football world and everything changes for Fleck and the Gophers. For at least one night, Minnesota gets the national stage with all eyes watching. Embrace the moment.

Ohio State will have a quarterback throwing his first collegiate pass in C.J. Stroud, but he has elite playmakers around him in Chris Olave and Master Teague. What’s the best way to limit the Buckeyes’ offense? Keep them on the sideline. The Gophers are led by reigning Big Ten Running Back of the Year Mo Ibrahim, who averaged 153.7 yards per game last season.

Run the ball, churn clock, keep the game low-scoring and most importantly, keep the Ohio State offense off the field.

The Gophers went 11-2 in 2019, their best season since 1904. Tanner Morgan set school records for passing yards, touchdowns and completion percentage. Having Tyler Johnson and Rashod Bateman certainly helped, but Minnesota needs the Morgan of two years ago this season. He’ll need to create chemistry with Chris Autman-Bell, Daniel Jackson and Dylan Wright among others.

PJ Fleck has had a method to win games ever since becoming a head coach: Win the "78 percent." That figure includes the turnover margin, tackling, creating explosive plays and limiting the opponent’s explosive plays. It’s a tall task for the Gophers to win the 78 percent against Ohio State, but they have to control the ball and win the turnover battle, make big plays and be sure tacklers.

The Gophers got off to a terrible start defensively in 2020, and it’s largely because they couldn’t stop the run or create pressure on the quarterback with their inexperience. Fleck and the coaching staff addressed that in recruiting, bringing in Clemson transfer Nyles Pinckney on the defensive line, Val Martin and Abilene Christian transfer Jack Gibbens at linebacker. They have veterans at all three levels of the defense, led by Boye Mafe, Esezi Otomewo and Micah Dew-Treadway on the line. In the middle, it’s Braelin Oliver and Mariano Sori-Marin with Gibbens. In the secondary, it’s Coney Durr, Jordan Howden, Tyler Nubin and Terrell Smith.

The job is to contain Stroud, Teague and Olave, which is far easier said than done.

The Gophers haven’t opened against a top-five team since TCU in 2015. We’ll find out Thursday night in arguably their toughest game of the year where the season could go.