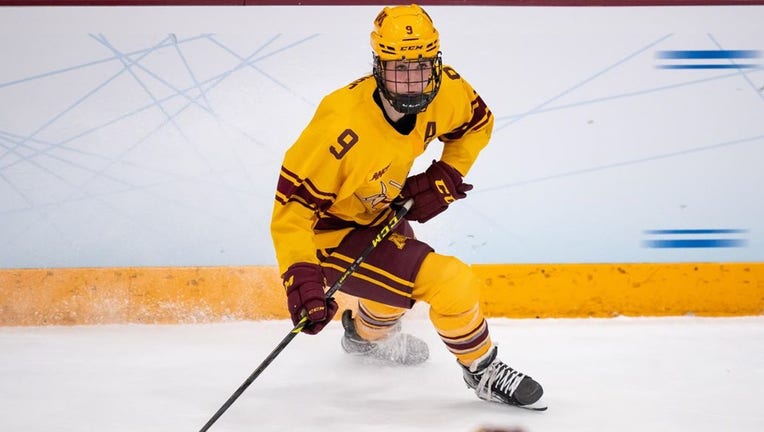 Gophers' senior Taylor Heise on Saturday was named the 2022 winner of the Patty Kazmaier Award. ((credit: University of Minnesota Athletics))

MINNEAPOLIS - Taylor Heise didn’t get the chance to win a national championship with the University of Minnesota women’s hockey team this season, but she got the next best thing.

Heise on Saturday was named the winner of the 2022 Patty Kazmaier Memorial Award, which goes annually to the top player in women’s college hockey. Gathered at the Gophers’ facility Saturday morning with teammates and family watching along, Heise sat in front of a TV as she heard her name called as the winner on NHL Network.

She was then mobbed by her teammates.

"My mind literally went blank for a good amount of time. Seeing my teammates and seeing my family, being able to celebrate with them was amazing," Heise said. "This has been a dream really. This doesn’t feel real to me. It means the world to have my name on an award that’s about Patty."

Heise is the third Gophers’ player to win the award, joining Amanda Kessel and Krissy Wendell-Pohl. Heise led the nation in scoring, as a First Team All-American, WCHA Player of the Year and the league’s Offensive Player of the Year.

"We are absolutely thrilled for Taylor, her family, teammates and our program," Gophers’ coach Brad Frost said. "She had a year that we will all remember and is very deserving of the Patty Kazmaier award. Taylor embodies what Patty was all about and we are so happy for her. To add her name to the likes of Wendell and Kessel, as past winners from the University of Minnesota, speaks volumes to the season that Taylor had."

Heise almost didn’t play hockey in college. She comes from a basketball family, and said it was a 50-50 decision on what to play after high school.

The season for Heise and the Gophers came to an end earlier than expected, after losing 2-1 to Minnesota-Duluth in the NCAA Tournament, one game short of the Frozen Four. The Gophers finished 29-9-1 this season, and Heise said she hopes to return for one more season.

For now, she’s just honored to be mentioned with Kessel and Wendell as the top player in college hockey.

"Having your name with two people like that who are very dominant players, but also such dominant people in the sport of women’s hockey. They have done so much for the sport, they’re both amazing people," Heise said. "To be named the Patty Kaz Award winner and finalist, I don’t really have words for it."