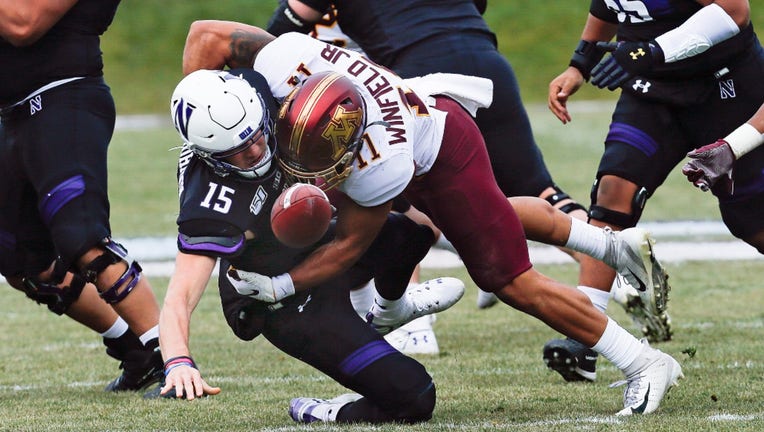 Hunter Johnson #15 of the Northwestern Wildcats is sacked by Antoine Winfield Jr. #11 of the Minnesota Golden Gophers during the first half at Ryan Field on November 23, 2019 in Evanston, Illinois. ((Photo by Nuccio DiNuzzo/Getty Images))

MINNEAPOLIS - There is a decent chance University of Minnesota safety Antoine Winfield Jr. will be selected in the first round of the NFL Draft in two weeks, and he learned Thursday he could be a part of the virtual coverage.

ESPN’s Adam Schefter released the names of 58 prospects who will be invited to participate virtually in the NFL Draft, which will be held April 23-25. It will be done online-only, with team officials communicating from remote locations as team facilities around the NFL are shut down due to the Coronavirus pandemic.

Winfield is among the 58 prospects on the list, which include most of the top talent in the 2020 NFL Draft. The NFL is still working on logistics and details with the draft two weeks away, but prospects will likely be interviewed via Zoom or another online platform after selections are made. That's also likley how teams will make their selections.

He could be selected in the first round two weeks from Thursday, and he might even stay in Minnesota. The Vikings have the No. 22 and No. 25 overall picks, gaining an additional first round pick in the trade that sent Stefon Diggs to the Buffalo Bills.

Winfield was named the Big Ten Defensive Back of the Year and a consensus All-American after his only fully-healthy season with the Gophers. He led Minnesota with 88 tackles, 3.5 tackles for a loss, three sacks and led the Big Ten with seven interceptions, which was also top five in the country. Winfield was a First Team All-Big Ten selection.

He had the attention of scouts and NFL team personnel after running a 4.45 40-yard dash at the NFL Combine.

P.J. Fleck has had to get innovative with recruiting due to the Covid-19 pandemic. Thursday night, he got one of his first recruits after showing him a virtual tour.

Steven Ortiz, a consensus 4-star defensive back from Arizona, announced his commitment to the Gophers. He chose Minnesota over Penn State, Oregon, Washington and others. He’s currently the No. 17-ranked defensive back in the country, according to 247Sports.

Ortiz put on a Gopher hat to make his college choice official, while his family donned Maroon and Gold shirts.