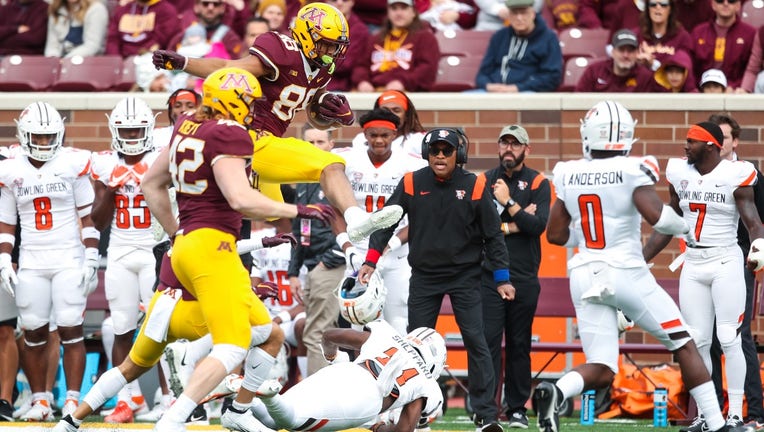 Brevyn Spann-Ford #88 of the Minnesota Golden Gophers jumps over Marcus Sheppard #21 of the Bowling Green Falcons for a first down in the first quarter of the game at Huntington Bank Stadium on September 25, 2021 in Minneapolis, Minnesota.  ((Photo by David Berding/Getty Images))

MINNEAPOLIS - PJ Fleck isn’t going to over-react to one game, even though Saturday’s 14-10 loss to Bowling Green on Homecoming will go down as one of the worst in his tenure at Minnesota.

The Gophers entered the game 31-point favorites. It should’ve been a tune-up as Minnesota gets back into Big Ten play this week, at Purdue. Instead, they trailed 7-3 at half and couldn’t get out of their own way despite getting several chances in the fourth quarter to come away with an ugly win. The Falcons pulled the upset, and left with a check to go with it.

Tanner Morgan completed just five passes for 59 yards, and was intercepted twice. He also lost a fumble. The Falcons finished with just 192 total yards, were 2-of-14 on third down conversions and still pulled the upset. It’s time to move on.

"No matter who we win or lose to, we come in on Sunday, we either celebrate the win or we forget about the loss, we put our leather vests on and we go right back to work," Fleck said. "That’s the mentality of those one-game seasons. As hard as it is to get over, you get over it and you move on."

Fleck called the offensive display "unacceptable" against the Falcons, and it started with the offensive line not able to keep Morgan upright. He was sacked four times and faced pressure most of the day. Fleck had to change their game plan on the fly after Chris Autman-Bell went down injured on the first catch of the game and did not return.

Fleck said Autman-Bell practiced Sunday night, which is a "really good sign" he’ll be back this week for Purdue.

The big question left from Saturday’s loss: How does a team go from dominating in a 30-0 win at Colorado to what we saw against Bowling Green? Even Fleck wasn’t sure what team he saw, but he pointed the finger at himself.

"One hundred percent it starts with me," Fleck said.

As bad as the loss was, the reality for the Gophers is everything is still in front of them in the Big Ten West. They’re 2-2 through four games, and now have all West Division opponents left.

That starts at Purdue on Saturday, which is 3-1, with its only loss two weeks ago at Notre Dame. The Boilermakers fought off Illinois 13-9 last Saturday. This situation is what Fleck’s "one game championship season" mindset is all about. Learn, move on and focus on the next opponent.

"We’ve had four games and really, they have no factor on the Big Ten West championship at the end of the day," Fleck said. "The result wasn’t what everybody else wanted and not what our team wanted, not what our coaches wanted, but we’ve learned a ton from that film. It’s our job to go apply that in the next game and do everything we can to be 1-0 in the Purdue season."