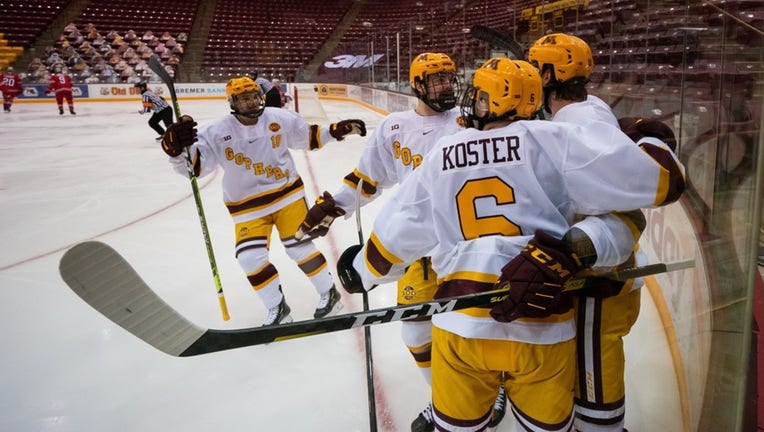 MINNEAPOLIS - The University of Minnesota men’s hockey team is off to its best start in more than 80 years after completing a sweep of Arizona State with a 6-4 win Monday night at 3M Arena at Mariucci.

The No. 1-ranked Gophers are now 10-0-0 on the season, and have swept five straight series. The Gophers had 12 Minnesota players collect points in Monday’s win. Mike Koster, Brannon McManus, Bryce Brodzinski, Blake McLaughlin and Sam Rossini all had two-point nights for Minnesota.

McLaughlin scored his first two goals of the season, and McManus, Brodzinski, Sampo Ranta and Jonny Sorenson each had goals in the victory. The six goals are the most the Gophers have scored in a game this season.

Sophomore goalie Jared Moe earned the win in his first start of the season, and got his first career assist. He made 20 saves on 24 Arizona State shots on goal.

"(Moe) made a couple monsters saves for us. He’s been awesome," Gophers coach Bob Motzko said after the win. "We’ve won some big games, and he’s the first guy out to congratulate (LaFontaine). He really had a good week of practice, we had to get him in there."

Minnesota outshot Arizona State (4-8-2) 32-24 in Monday’s series finale. The Gophers head to No. 12/14-ranked Wisconsin next Saturday and Sunday.

Minnesota returns to Big Ten play next weekend with a road series at No. 12/14 Wisconsin on Saturday, Jan. 9 and Sunday, Jan. 10. Game times and broadcast information for that series will be announced at a later date.