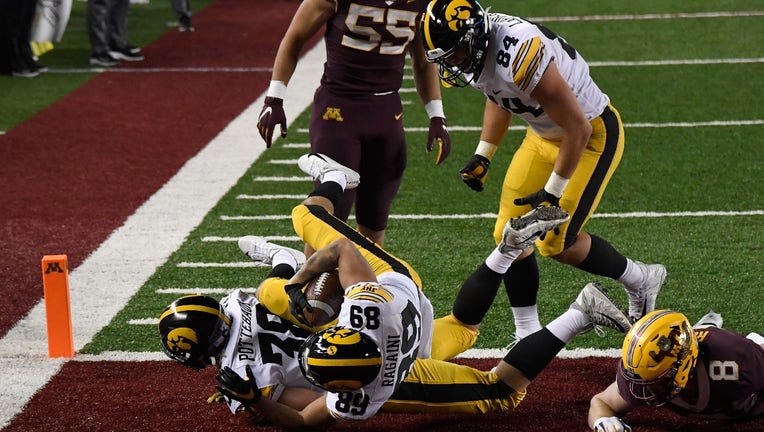 Nico Ragaini #89 of the Iowa Hawkeyes scores a touchdown against the Minnesota Golden Gophers during the first quarter of the game at TCF Bank Stadium on November 13, 2020 in Minneapolis, Minnesota.  ((Photo by Hannah Foslien/Getty Images))

MINNEAPOLIS - It’s Pig Week at the University of Minnesota.

One of the appeals and draws to playing for PJ Fleck and the Gophers is rivalry games in the Big Ten. The Gophers play at least three of them every year in the West Division between Iowa, Wisconsin and Nebraska. Throw in Michigan with the Little Brown Jug when they’re a crossover opponent from the East, and it’s four trophies in a season.

The Gophers (6-3, 4-2) head to Iowa City on Saturday, and this year’s battle for Floyd of Rosedale is a little more magnified. Minnesota, Iowa, Wisconsin and Purdue are all tied atop the Big Ten West at 4-2, with three regular season games left. For the Gophers, it’s at Iowa, at Indiana and the regular season finale against Wisconsin.

It’s a 2:30 p.m. kickoff Saturday at Kinnick Stadium, and the Gophers would love nothing more than to head back up Interstate 35 with the bronze pig.

Morgan was the quarterback two years ago when the Gophers were 9-0 and ranked No. 10 in the country. A golden opportunity to take control of the Big Ten West, and they came up short 23-19.

Last year, the Hawkeyes came to Minneapolis and ran over Minnesota, 35-7. Kirk Ferentz added a little fuel to the rivalry, burning three straight timeouts with 19 seconds left. After the game, Ferentz said, "We figured we’d take Floyd with us and leave the timeouts here."

Fleck is 32-22 in the middle of his fifth season at Minnesota and just signed a new seven-year contract, but he hasn’t yet gotten the results in trophy games. Fleck is 1-7 combined against Iowa and Wisconsin, 0-4 against the Hawkeyes.

"They’ve got great tradition, rivalries are what makes college football really special," Fleck said. "It’s a one game championship season with a rivalry trophy on the line. It’s really fun to coach in games like that."

Saturday marks the 87th meeting between the two schools. The series couldn’t be more even, at 42-42-2. Minnesota hasn’t beaten Iowa since a 51-14 thrashing in 2014 at then TCF Bank Stadium, when fans rushed the field in celebration. The Gophers haven't won in Iowa City since 1999.

Players and coaches in the program have seen what can happen when the Gophers win a trophy game. In 2018, Fleck’s squad pounded Wisconsin 37-15 at Camp Randall in the regular season finale to earn bowl eligibility. The Gophers brought home Paul Bunyan’s Axe, with fans waiting to celebrate with them at the football complex, and the Axe getting paraded around Minnesota for the next year.

If the Gophers beat the Hawkeyes Saturday, they remain atop the Big Ten West with two games left and can start planning a similar parade.

"This has always been a big one for us every year, and every year that we play them it’s always a big game," rush end and Golden Valley native Boye Mafe said. "The fact that it is Iowa, it means a lot to us. It’s a rivalry game, winning that trophy means a lot to the state of Minnesota, not just us as players, but as a whole state."

Floyd of Rosedale is a 15.5-inch high, 21-inch long bronze statue that the two teams starting playing for in 1935. With tension growing between the two states, Minnesota Gov. Floyd Olson bet a Minnesota pig against an Iowa pig that the Gophers would win. Floyd was born after a pig donated from Rosedale Farms in Iowa was brought back to Minnesota following a 143-6 Gophers win.

Gophers linebacker Jack Gibbens, a Texas native, is getting a crash course on the rivalry this week. He grew up watching Texas play Texas A&M, and the Red River battle between Texas and Oklahoma.

"Obviously it’s a big deal to people around here, I didn’t grow up in Big Ten country so it’s kind of all new to me," Gibbens said. "They’re saying it’s 80-something pounds, that’s crazy. It’s super cool. I’m excited for it, it’s just really cool to have these rivalry games that mean a little bit more."

A chance to bounce back from a home loss to Illinois, a chance to win a rivalry game and get one stop closer to a Big Ten West title. A huge opportunity awaits Fleck and the Gophers on Saturday, and a program that touts "response" will need exactly that to beat the Hawkeyes.