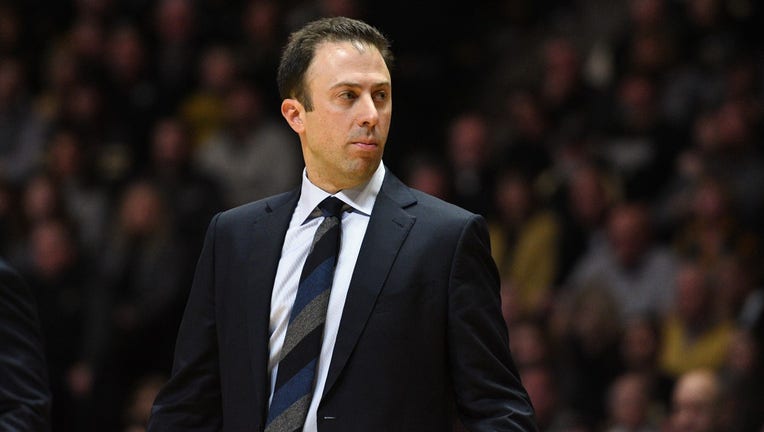 MINNEAPOLIS - Long after the Gophers had lost to Rutgers 77-70 in overtime Saturday, the team’s final regular season home game, Richard Pitino soaked in a final few moments at Williams Arena.

With his wife and kids at the game, they took pictures before heading home. The Gophers finished the regular season 13-14, 6-14 in the Big Ten and on a seven-game losing streak. After an 11-4 start and being ranked as high as No. 16 in the country, the Gophers are in free fall mode entering the Big Ten Tournament.

Gophers men’s basketball head coach Richard Pitino joins The Gopher Coaches Show ahead of the team’s appearance in the Big Ten Tournament. Pitino chats about injuries and also addresses the questions surrounding the program after finishing the season with seven straight losses.

With plenty of speculation surrounding Pitino’s future at Minnesota, the consensus is Saturday might have been his final home game as the Gophers’ coach. He hopes that’s not the case.

The Gophers, for the second straight season, will play on the opening day of the Big Ten Tournament. They have the No. 13 seed, and will face No. 12 Northwestern. Pitino said they’ll be without Gabe Kalscheur, who is still dealing with a broken finger on his shooting hand. It’s also very unlikely that Liam Robbins, who has missed four straight games with an ankle injury, will play.

Brandon Johnson hasn’t practiced due to a bad ankle, and Both Gach is limited with a foot injury. A loss Wednesday night ends Minnesota’s season at 13-15, and Pitino’s tenure at Minnesota is likely over after eight seasons.

Johnson, who could return to the Gophers next season regardless of Pitino’s status, said it won’t affect whatever his decision is for next year.

"I understand it’s a business. It would be sad to see Coach Pitino go, the guy that brought me in, the guy that motivates us every day to do better, strive to be better," Johnson said.

All odds are against the Gophers this week. They’re on a seven-game skid, they have two starters out with injuries and two others playing through injuries. Needing wins in their last four games to lock up an NCAA Tournament game, the Gophers went 0-4. Three of those losses came to Nebraska, Penn State and Northwestern, three bottom-feeders in the Big Ten.

They now need to win five games in five days, starting Wednesday, to be dancing and possibly save Pitino’s job.

"The mindset is go on a run, simple as that. It’s to go in there and win every game that we can, go on a run and come home with a championship," guard Marcus Carr said.

A team that’s won just six Big Ten games and lost 10 of its last 12 sounded remarkably confident Tuesday it can make a run in Indianapolis. It’ll be a tall task without Robbins, one of the top centers in the Big Ten, and Kalscheur, the team’s top defender.

"When you’re a competitor, you’ve got to believe you’re going to win. That’s got to be our mindset," Pitino said.

"Knowing these guys, I know that we’re capable of making a good run in this tournament. I believe that 100 percent in my heart. I’ve never been this confident going into a tournament before," Johnson said. "Everybody is going to be playing with a chip on their shoulder. They understand we need these games to get to where we want to be."

A win Wednesday and the Gophers move onto face Ohio State. There remains an elephant in the room as they head to Indianapolis, and it’s Pitino’s future. Minnesota native Brian Dutcher, currently the coach at San Diego State, was even asked Monday about the Gophers’ job potentially being open. He side-stepped the question. Dutcher's contract includes a buyout of just $1 million if he was to come to Minnesota. His father, Jim Dutcher, coached the Gophers from 1975-85 and led Minnesota to a Big Ten ttile in 1982.

Pitino hasn’t been officially dismissed yet, and there’s already talk of who will replace him. It’s the nature of the business in college sports.

"Yeah that part of the job sucks, there’s no getting around it, it’s not fun. But you keep a positive attitude, you continue to coach your guys to the bitter end," Pitino said. "Unfortunately it’s part of the profession. Nobody is immune to it, it’s not fun to go through at all but it’s what we signed up for."