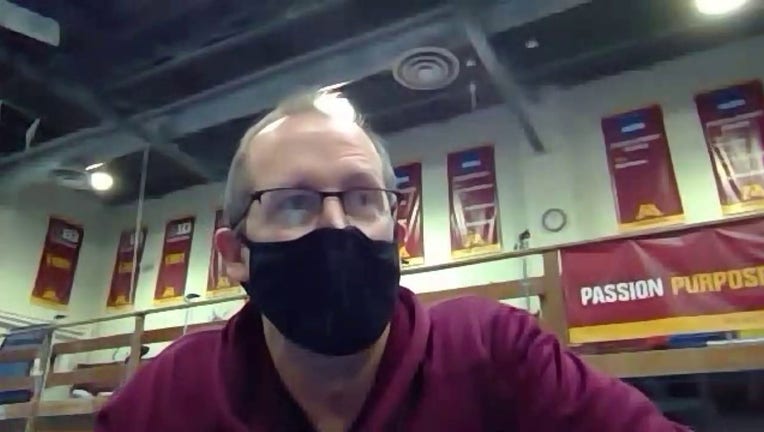 The University of Minnesota men's gymnastics team opens its final season of competition Saturday night against Iowa at Maturi Pavilion.

MINNEAPOLIS - The University of Minnesota men’s gymnastics team gets to go on one last ride in 2021, something that wasn’t guaranteed to the program the last several months for a variety of reasons.

The Gophers’ squad had its world turned upside down last September. They had a meeting with Athletic Director Mark Coyle, which brought its own element of doom. The team was told due to financial issues as a result of the COVID-19 pandemic, their program would be one of three cut.

The University of Minnesota men’s gymnastics team gets to go on one last ride in 2021, something that wasn’t guaranteed to the program the last several months for a variety of reasons.

The Minnesota athletic department is projected to have a $75 million loss in revenue, with sports either not playing or not having fans in attendance due to COVID-19. Something had to give, and it meant cutting men’s gymnastics, tennis and track and field after 2021. The move was later approved by the Board of Regents.

"Obviously emotionally and just from the program standpoint, a 117-year-old program about to see its final year, it’s not been easy," coach Mike Burns said Thursday. "It’s kind of like you pull something out of your heart a little bit, right? Something’s missing, so that’s been hard."

Senior Henry Meeker, a legacy gymnast for the Gophers, says he immediately thought of his teammates when they all got the news. He’s known the program his entire life, his dad was a gymnast and he grew up in camps. Gopher gymnastics is his escape from life, it’s all he knows.

"My mind immediately went to my teammates and just thinking that these guys were told they would have four years here. Obviously it was terrible to see that that ended for them," Meeker said.

That said, the show must go on now that it can, at least until April. The Gophers open their regular season, which will consist of six dual meets against the six other Big Ten programs, Saturday night against Iowa at Maturi Pavilion.

"Every weekend is going to be a battle. Hats off to the Big Ten Conference making that work. I don’t know how the guy who does the scheduling does it, talk about a giant jigsaw puzzle that will never fit together. But they got it done," Burns said.

After six regular season meets, the Gophers will compete in the Big Ten Championships in the first weekend in April. Then all eyes are on the NCAA Championships, two weeks later at Maturi Pavilion.

The best of the best in college gymnastics will be in Minnesota’s home facility. The last time the Gophers hosted the NCAA meet was 2009. This time around, it’s their last chance to compete as a team ever.

"Having a meet like that at home is just a treasure. It’s a real gift. This will be our last hurrah, and these guys are ready to go out there and take the world by storm. I think that’s a huge motivating factor," Burns said.

Their current focus is going out on Saturday and doing battle with Iowa. It’s a chance last fall they didn’t know they’d ever get.

"This first meet is going to be exciting to see what we can do in a serious competition setting, and what drives us," Meeker said.