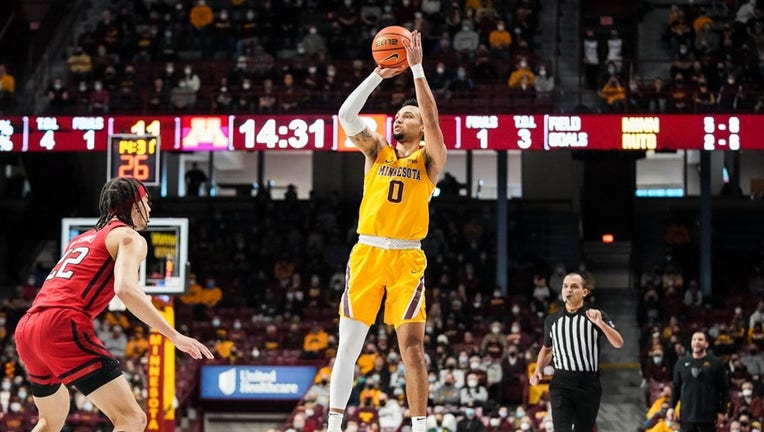 Minnesota guard Payton Willis scored a career-high 32 points, including a record 8 3-pointers, in the Gophers' 68-65 win over Rutgers on Saturday at Williams Arena. ((credit: University of Minnesota Athletics))

MINNEAPOLIS - After a historic performance in a 68-65 win over Rutgers on Saturday at Williams Arena, University of Minnesota guard Payton Willis has been named the Big Ten Co-Player of the Week.

Willis scored a career-high 32 points and tied a program record with 8 3-pointers in Saturday’s win. Willis shot 11-of-17 from the field, including 8-of-13 from the perimeter and was a perfect 4-for-4 in the second half. He played all 40 minutes, with the Gophers out three starters between injuries, illness and COVID-19 protocols.

Eric Curry remained out with a left ankle injury, leading scorer Jamison Battle was out with a non-COVID related illness and E.J. Stephens didn’t play Saturday. It was Minnesota’s second Big Ten win of the season, as the Gophers snapped a four-game losing streak to improve to 11-5 on the season.

In addition to a career-high in scoring, Willis three rebounds, seven assists and one steal. He also scored his 500th career point with Minnesota, and has 1,098 for his career.

The Gophers host No. 16-ranked Ohio State at 7 p.m. Thursday at Williams Arena.