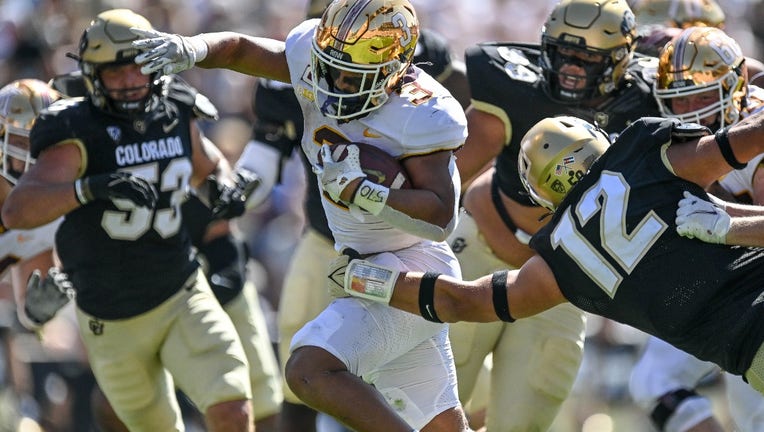 MINNEAPOLIS - The University of Minnesota football team still has the longest non-conference win streak in the nation, now 21 straight games after a dominant showing in a 30-0 win at Colorado on Saturday.

Thousands of Minnesota fans made the trip to Boulder for the game, and they’ll have a celebratory flight home. Gophers’ players, PJ Fleck and his wife, Heather, left the field thanking all of them for being there. They were the only ones left at the final horn, with most Colorado students and fans having already filed out of the blowout.

Gophers football rolled to an easy win on Saturday, taking down the Colorado Buffaloes by a score of 30 to nothing.

"This is incredible. A third of the stadium was full of maroon and gold. This isn’t just across the border, this is a flight. People take time out of their entire weekend, just so proud of our fans. That kept us going all the way throughout the game," Fleck said.

Trey Potts led the offensive charge with 26 carries for 121 yards and three touchdowns, but the story of the day was Minnesota’s defense. The Gophers had four sacks, two each from Boye Mafe and Thomas Rush, eight tackles for a loss and got a turnover with a Jack Gibbens forced fumble, which Justus Harris recovered.

The Gophers entered the game with no sacks on the season. They got pressure on Brendon Lewis and shut down the run game, largely without blitzing. Colorado finished with -19 rushing yards on 21 carries.

The Buffaloes had seven total yards in the first half, finished with just seven first downs and 63 total yards for the game, averaged 1.4 yards per play and they were 2-for-12 on third down. Most importantly, zero points. It’s Minnesota’s first shutout of a Power 5 team since 1977, three years before Fleck was born.

"We rallied around the football, we tackled really well, I thought our game plan was really good. The whole word of the week was fun. We needed to go out there and have fun," Fleck said.

"That’s huge. What a game. I’m so proud of our defense for that," quarterback Tanner Morgan said.

Fleck compared the win to having a big steak dinner with all the fixings before the meat. Had they executed better in the first half, the end result would’ve been far bigger than 30-0.

"You kind of have the appetizers a little bit, you order it, you get the appetizer, you get the salad, the soup. By the time you get it, you only eat three quarters of it. You still left a lot of meat on the bone," Fleck said.

Fleck made sure preparation wouldn’t be an issue, heading to the elevation at 5,337 feet that Folsom Field sits at. The indoor football complex was heated to prepare for the 90-degree heat, and the team flew in late Friday night. They spent as little time as possible in Boulder.

Potts got the Gophers on the board with a 13-yard touchdown in the second quarter. On their next drive, Morgan hit Dylan Wright for 39 yards. Potts then ran for 13 yards before scoring from two yards out to give Minnesota a 13-0 lead. There were multiple opportunities to extend the lead before half, but one drive ended in a punt and another a missed field goal.

Potts' third score of the day, hurdling his own linemen and Colorado defenders, gave the Gophers a 20-0 lead late in the third quarter. The lead felt much greater, with the Buffaloes unable to generate any offense. For Potts, it’s his second straight 100-yard rushing game after going for 178 against Miami (Ohio).

"I think we played lights out. We just played really physical football early on. Everybody, I think, did their job today," Potts said.

Fleck has his "pair and a spare" running the ball. With Mo Ibrahim out, it’s now Potts, Mar’Keise "Bucky" Irving and Ky Thomas. Irving finished with 15 carries for 89 yards, and Thomas had seven carries for 66 yards, and his first career touchdown from 14 yards out provided the knockout punch, putting Minnesota up 30-0 with 5:09 to play.

Minnesota’s only struggle of the day came in special teams. Matthew Trickett missed two field goals and an extra point.

Minnesota manhandled a team on both sides of the ball that, a week before, had a lead on No. 5-ranked Texas A&M until the last four minutes.