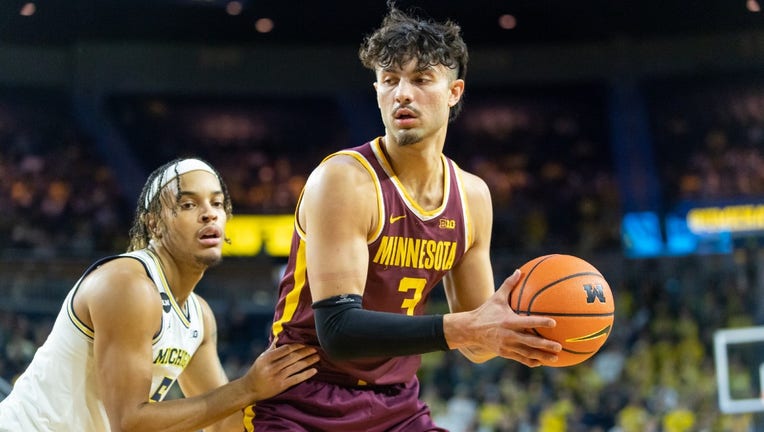 Gophers forward Dawson Garcia scored 13 points in a loss at Michigan, but suffered an ankle during the second half and his status for Indiana is uncertain. (credit: University of Minnesota Athletics)

MINNEAPOLIS - The University of Minnesota men’s basketball team looks to snap a three-game losing skid against Indiana Wednesday night at Williams Arena, and they might have to do it without their leading scorer.

Prior Lake native and North Carolina transfer Dawson Garcia left Sunday’s loss at Michigan in the second half with an ankle injury after making a 3-pointer. He played 26 minutes, finishing with 13 points and two rebounds, but also had seven turnovers and labored up and down the court in the closing minutes.

Gophers could be without star Dawson Garcia Wednesday against Indiana

The University of Minnesota men’s basketball team looks to snap a three-game losing skid against Indiana Wednesday night at Williams Arena, and they might have to do it without their leading scorer.

Garcia is Minnesota’s leading scorer at 14.9 points per game, and had a season-high 28 points in their last Big Ten win, at Ohio State. The Gophers held a light walkthrough on Tuesday, and will do another before Wednesday night’s game.

"We’ll see, I know if it’s up to him, he’s going to play. But we’ve got to talk about what makes sense and be able to be smart about it like we always do with our guys. We’ll see on that," Johnson said.

Johnson said earlier in the day on his weekly radio show that the injury doesn’t appear to be significant, but it could keep him out of at least one game. Testing after the loss at Michigan showed nothing was broken for Garcia. He left the game briefly in the second half and went back to the locker room.

He returned to the bench and tried to play the final stretch, clearly ailing.

"He couldn't push off of it very much. He wanted to give it a go. Give him a ton of credit. It just got to a point where you just don't want further injury. He's just out there like a lame duck. The kid's a warrior, but he just couldn't go."

If he can’t go, it’s another injury to an already beat up Gophers’ squad. Parker Fox and Isaiah Ihnen are out for the season, and freshman guard Braeden Carrington is out at least four weeks with a stress reaction in his leg.

It’ll be up to Jamison Battle, Ta’Lon Cooper and Pharrel Payne, among others, if Garcia can’t play.

"Just filling that void, next guy up. I think everyone prepares for the moment, I think everyone is ready for the moment on this team and I think that’s something I see as a leader," Battle said. "These guys are willing to whatever it takes to learn, and I think that’s really what’s special about this team regardless of wins or losses. We’ve learned from every loss, from every win, it’s just that process."

It hasn’t been the season Battle, Johnson or the Gophers had in mind, at least from a record standpoint. Minnesota is 7-11 on the season, just 1-7 in Big Ten play and followed an emotional win over the Buckeyes with blowout losses to Illinois and Purdue.

So how do the Gophers stay patient with the long-term vision for the program, when wins now are few and far between?

"It’s just overall growth. We talk about whether it’s practice or a game, getting better and finding victories and not taking steps back. I can live with tough results, that’s kind of part of it as you’re growing and maturing," Johnson said. "It’s hard to live with if you have that and I didn’t feel like we took a step getting better. I’m focused on that, how can we improve as a team overall?"