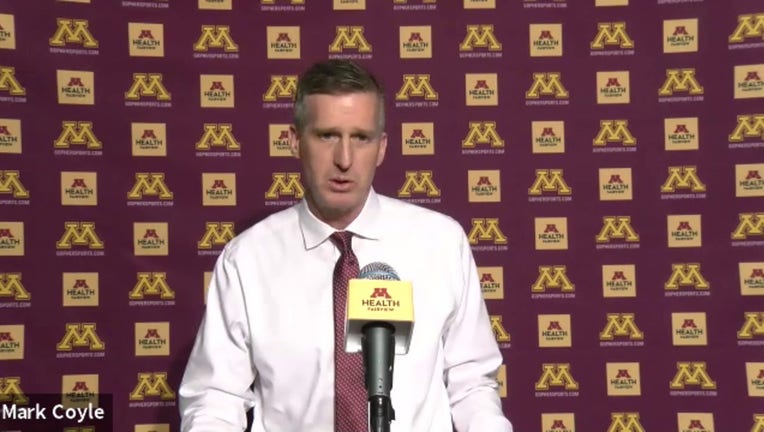 MINNEAPOLIS - University of Minnesota Athletic Director Mark Coyle made his first public comments Tuesday morning since making it official that Richard Pitino was no longer the school’s men’s basketball coach.

Coyle made the news official late Monday night, announcing the school has parted ways with Pitino after eight seasons. About a half hour before Coyle met with reporters via Zoom on Tuesday, the University of New Mexico named Pitino its next head coach.

A day after cutting ties with Richard Pitino, University of Minnesota Athletics Director Mark Coyle explained how the university will begin its search process for new men's basketball head coach.

Coyle felt the time had come for a change. He said he had met with Pitino several times over the course of the season, but didn’t ultimately make the decision official to part ways with him until Monday. Pitino and the Gophers finished the 2020-21 season 14-15 after losing to Ohio State in the Big Ten Tournament. In Pitino’s eight seasons, the Gophers finished 54-94 in Big Ten play and were above .500 in the league just once.

The downfall for the 2020-21 Gophers started when Liam Robbins and Gabe Kalscheur each went down with injuries. Brandon Johnson and Both Gach each played through ailments, and after starting 11-4 and being ranked as high as No. 16 in the country, Minnesota lost seven straight entering the Big Ten Tournament an finished losing eight of its past 10.

In eight seasons with Pitino, the Gophers made two NCAA Tournament appearances and got one victory. Too many times, they haven’t been relevant on Selection Sunday.

Minnesota hasn’t won an official Big Ten title since 1982. The Gophers won it in 1997, the same year as their run to the Final Four, but that has since been vacated due to the program’s academic scandal at the time.

"I’ve talked about this publicly. I did not come to Minnesota to be .500. I’m very aware that it’s been since 1982. There is no reason why we can’t compete at a high level. We have the pieces in place here at Minnesota," Coyle said.

Coyle said the search is already underway for the next head coach, and he’s already received several phone calls from interested candidates. Coyle said he will not use a search firm to find the next head coach. Rather, they’ll use a diverse search committee within the university to find the right fit. Coyle met with current players Monday night over Zoom, and asked for their patience as he searches for the next coach.

One thing that will have to improve with the next head coach? In-state recruiting. Pitino didn’t get the time to recruit Tyus Jones, Rashad Vaughn and tried hard to get Reid Travis. Jalen Suggs wasn’t going to stay in Minnesota, and Dawson Garcia chose Marquette over the Gophers.

Letting recruits like McKinley Wright, Will Tschetter and J.P. Macura get away in the future will be costly. Minnesota high school basketball churns out top-100 talent every year. It’s the job of the next head coach to make sure some of them are wearing Gophers’ jerseys and playing in Williams Arena. Daniel Oturu and Amir Coffey have already proven you can stay home, and get to the NBA.

"There is no doubt that you’ve got to be able to recruit your in-state talent. We have wonderful talent here, and we want to find people that can recruit. It’s the backbone of any program," Coyle said.

The bottom line is it was time for a change, and Coyle isn’t afraid to make it. He’s made big coaching hires in P.J. Fleck, Lindsay Whalen and Bob Motzko, so the expectation is he’ll make a splash with the next men’s basketball coach.